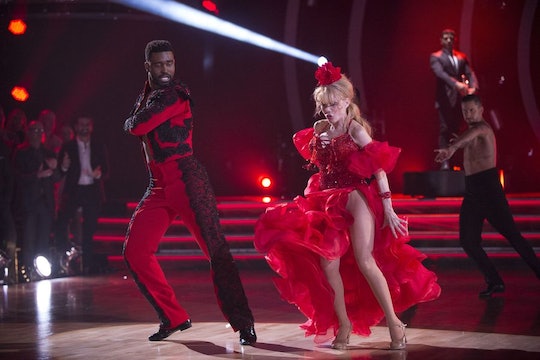 Charo narrowly missed getting eliminated during Week 2 of Dancing With the Stars, with Chris Kattan being sent home instead. So when Charo was eliminated on Dancing With the Stars Monday night during Week 3, it wasn't too surprising, given her history with less than stellar scores. Since the numbers that get contestants sent home on DWTS are a combination of votes and judges' scores, things weren't really working in Charo's favor lately.

In some ways, she's the adorable contestant who says what she wants and gets away with it and who everyone laughs with. But in other ways, she became someone for fans to get annoyed with. On Twitter Charo has either been hit or miss with DWTS fans and it looks like overall, they decided that out of all of the remaining contestants, she should be the next one to go home.

Somehow, it's always surprising when someone is eliminated on DWTS, regardless of who they are and even though there were plenty of rumors about Charo quitting on her own accord, she even took to Twitter Monday to assure everyone that she planned on staying on the show and was having a good time. Unfortunately, fans had other ideas and Charo was eliminated on DWTS for Week 3. And there have definitely been some mixed reactions.

Like I said, you either loved or loathed Charo on DWTS and even though she was sometimes totally over the top or being too much for some, it was all about entertaining the audience and getting people talking. For the short time Charo was part of the show, she had plenty of people talking about her.

She even had a short-lived faux feud with Bruno. Shortly after she was told she was eliminated, she was asked if she had any last words for the judge, to which she replied, "Bruno, I'll see you in the parking lot!" But for Monday's Vegas Night performance, Bruno was surprisingly encouraging for the "cuchi cuchi" dancer, much to her shock, adding to a combined score of 24 out of 40. Where some of the stronger dancers have broken into the realm of eights or nines, Charo remained on the lower end for Week 3, which means she may have been out soon anyway.

Charo and Keo's dance for Vegas Night on DWTS was all about a Vegas wedding, featuring the 66-year-old performer in a powder blue wedding gown that apparently gave judge Julianne Hough "major wedding inspiration," and let the judges see a softer side of the usually feisty dancer. But it wasn't enough to save her from the previous week's performance and although it wasn't entirely surprising, Charo getting eliminated on DWTS is going to be an absence we'll all feel.