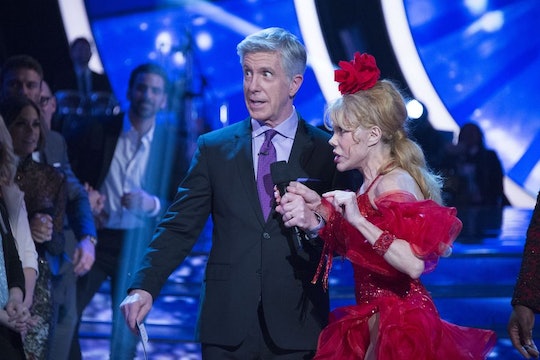 This Charo & Bruno 'DWTS' Feud Is Getting Intense

Sometimes, the best part of Dancing With the Stars isn’t necessarily the well-choreographed dance routines, but instead the drama that comes before and after each performance. The totally loveable and big personality of Charo is one of the many reasons why the entertainment part of DWTS is so fun to watch, especially this season. But how real is the tension between her and judge Bruno? And do Charo and Bruno get along on Dancing With the Stars?

Their recent feud that was sparked after Charo felt she was unfairly judged on the competition show seems like it’s been all in good fun, but it’s plenty possible that Charo and Bruno’s feud on DWTS is actually the real thing. When she spoke to E! News shortly after she came this close to an elimination, Charo said that not only was she disappointed that Chris Kattan was eliminated but, in her eyes, the higher scores given to Mr. T were unfair.

According to the outlet, a source close to the show revealed that not only has Charo been put off by the lower scores from Bruno, but because of them, she’s threatened to quit the show altogether. Could this alleged threat be due to Charo’s feud with Bruno above all else?

Usually, Len is the harsher judge and he’s been met with some audience boos so far this season on DWTS, but it’s been Bruno who seems to be clashing with Charo the most for some reason. As far as she’s concerned, at least. Since Week 1, Charo was firing back at the judge each time she was given a score or assessment from him that she didn’t quite agree with. And he was all about egging her on, claiming during Week 2 that during her dance he saw her "cuchi cuchi," playing on her song that she and partner Keo had danced to. Will Charo really quit DWTS because of her apparent feud with Bruno? I seriously hope not, because all she’s doing is telling a judge like it is instead of nodding in silence.

For Week 1, Charo and Keo got a combined score of 21/40 and Week 2 they were met with a 25/40, including a six from Bruno, which fanned the flames of the feud between Charo and Bruno. These are scores which also played a role in potentially eliminating Charo and Keo. And even though Chris Kattan ended up being eliminated instead, Charo obviously isn’t done with Bruno yet.