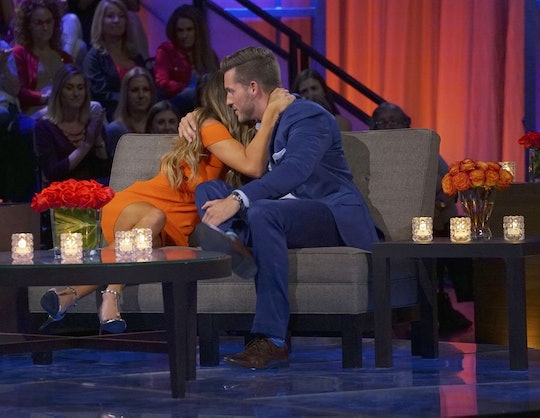 Chase & JoJo Reunite On 'The Bachelorette: Men Tell All' & They Seem To Reconcile

It was down to the final three guys on Monday night's episode of The Bachelorette, and JoJo was no stranger in making difficult choices. She had chosen Chase for the fantasy suite, and he was so comfortable with her, he said "I love you." Unfortunately, however, that proclamation made JoJo realize she needed to let Chase go. We know from Chase's hometown visit how difficult it was for him to say that, so he was devestated – and from what we see, he still is. Despite that, though, Chase reunited with JoJo on The Bachelorette: Men Tell All and the two seemed to reconcile.

Chase's elimination clearly hit him hard. We learned when JoJo visited his hometown that his parents' divorce deeply affected him and his sister, so much so that declaring love is not easy to do. After the visit he did express that he loved her, and because JoJo knew what he had been through, that pretty much assured him a spot in the top three. Chase was under the assumption that when JoJo gave him the fantasy suite card, that he was safe once again.

Chase learned the hard way that was not the case. He and JoJo did not even have time to enjoy the suite when Chase told her that he loved her, which turned out to be his final downfall. At this point, JoJo needed to come clean and say the feeling was not mutual. Chase understandably did not take this well – and even so much as returned for the rose ceremony despite being sent home prior.

So when Chase returned for Men Tell All to talk to JoJo, it could've gotten really ugly really fast. Initially Chase did express some anger as to why JoJo did what she did. She profusely apologized and said she still regrets doing that. Chase then softened, and what could have been a confrontation turned into a reconciliation. Chase said that JoJo "taught him a lot," and he thanked her for that.

We're not so sure if the wounds of Chase's elimination have completely healed (actually, it's probably safe to say they haven't). Thankfully, however, it seems that he has forgiven JoJo and will move on. Perhaps Chase will look back on his experience on The Bachelorette and think about how JoJo helped him rather than hurt him. Maybe he'll even nab a season of The Bachelor to call his own and continue trying to find love.