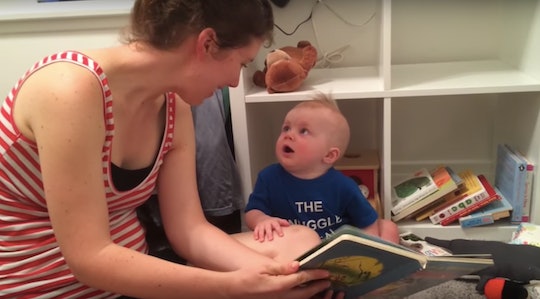 Remember The Saddest Bookworm? You've Got To See Him Now

Back in 2015, a more innocent internet age, you may recall your mom's friend Barb emailing you a Yahoo link to "The saddest bookworm," a viral YouTube video in which a baby would burst into tears every time his mother reached the end of a story. It was a small masterpiece.

Emmett, the titular bookworm, wore a "the snuggle is real" onesie and a face so plaintive and trusting that most adults who saw the vid simply could not deal. He rested his little hand on his mother's knee, gripping himself for the end of the book, the passage of time, et cetera et cetera. That little hand still plays the strings of my heart like a cello. So much so, that I sought out the story behind the saddest bookworm, which has by now been viewed around 10 million times.

Little Emmett was around 9 or 10 months old when he "started doing this funny book-crying thing," his mother, Alicia Stevers, tells me by phone. She and her husband Dan, who live in Michigan, were in the habit of taking lots of videos to send their families in California. When Emmett started bawling every time they read out "THE END" they knew: "We have to send that to the grandparents."

Dan filmed several takes, and instead of sending the best one to family, edited them together into a supercut (Dan is an artist), and posted it to Facebook. Family members had trouble sharing the video because of Alicia's privacy settings, so they deleted it from Facebook and uploaded it to YouTube. That's when things got wild.

By the end of the next day, the video had been viewed a half a million times. The day after, it crossed the million-views mark.

Suddenly, licensing companies and bizarre home networking outfits were contacting the Stevers. Comments ranged from kind ("so funny or so cute"), overwhelmingly so, to mean ("There were people who were saying like, 'He's clearly going to be autistic, no kid would react this way'"). The Stevers licensed the clip, in part to control where it was reposted, and in part to reap the rewards — about a penny for every hundred views. Alicia estimates they earn about $1,000 per million views.

"At first those cheques were great, and now it's obviously slowed down and we get $50 every four months or so," she says. The Stevers deposit the royalties into an account for Emmett, and are thinking of taking him on a family trip to Disney when he's old enough to understand the meaning of the video.

It was just one of those quick kid-things where he would cry every time it was over.

What were the Stevers tapping into when they uploaded a greatest hits video of their baby crying at I Am A Bunny? Certainly, armies of self-described book-nerds did their work ferrying the video out to others who never got over The Giving Tree or Bridge To Terabithia — the clip conveyed the disappointment in ending a great book, or a sad book, or a great sad book. It also captured a fleeting age where a bébé is lucid, sitting up, engaged, but as sensitive as a zucchini blossom. It captured a moment, Alicia says, that lasted no more than two weeks.

"It was just one of those quick kid-things where he would cry every time it was over. He does not do that anymore." Emmett, who is now 3-and-a-half, loves to watch the video, and will ask, "Why am I crying?"

Emmett's grandmother still checks the views on the video every day, but Alicia says it stresses her out. The family have largely leaned out of the fuss, using their platform to plug initiatives like Traveling Stories, a San Diego-based literacy nonprofit.

But the video translates well: Emmet has retained his sweet and sensitive temperament in his greater age, says his mom.

"He's very non-confrontational, he's not aggressive, he'd be completely happy sitting with a book and reading," Alicia says of Emmett, who will often quietly read in his room after bedtime, paging through books and pausing to take in every illustration.

"He's not one of those physical, all-over-the-place, climbing-on-everything kind of boys, he's much more reserved and sensitive."

Three years on, his viral fame is a funny footnote to their lives. Alicia, who teaches undergrad linguistics as part of her PhD training, will show the video to her students on the first day as an icebreaker, and says there is always a student who has seen the video, and insists she bring in Emmett to meet the class. "Sometimes I do!" she says.

Once Alicia completes her dissertation on the historical change and social meaning of a certain determiner construction — focusing partially on an experiment involving language in social media it's no big deal what's your dissertation on — she hopes to move the family back to San Diego, where she can spend time researching the language contact situation around the Tijuana border. That she is interested in the minute laws at work in conversation belies the time she just so stumbled on something near universal in the image of her son placing his tiny, pained face to the carpet at the end of a book.

It's an image that lives on.

"He looks at every page, he looks at every picture. He is at the stage where he knows his letters, he knows some words, and he's trying to understand them more," Alicia says. "He just loves his books." The end.

Traveling Stories is a nonprofit devoted to improving literacy among kids in poverty, and feeding minds and imaginations. The organization has StoryTents in California, Ontario, and Tennessee. To volunteer or donate, visit TravelingStories.