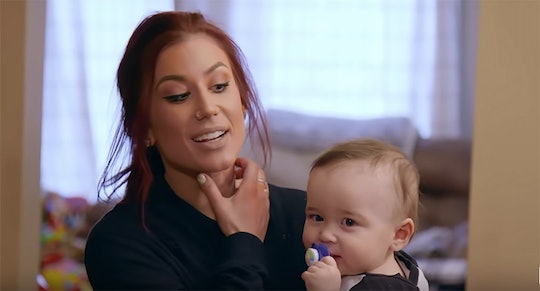 Teen Mom 2 star Chelsea Houska tends to be more private than her fellow co-stars for good reason. Houska endured a few scary moments with fans at her home (yep, that happened), and she prioritizes her kids' safety because of these incidents. But rest assured there are moments when Houska does confide in her supportive TM2 fan base. Case in point: on Thursday, Chelsea Houska opened up about her labor with baby Layne and the differences between her three pregnancies.

Houska has touched on the birth here and there, including a post on Tuesday about how calm she felt before the delivery. She wrote on Instagram:

I love this photo so much. We had just rolled into the hospital at 7am to have our baby girl. We were both calm, SO excited and had smiles on our faces (even though I was already dilated to a 7😬) and she was in our arms 2 hours later! This man is my BEST friend and I’m so grateful that I get to have him as my partner in everything. 💘 @coledeboer.

Considering many people love Houska and her fam, the mom decided to hop on to Instagram Stories Thursday to answer some questions about her pregnancies.

Houska dished on how long it took to deliver each of her kids, writing:

Yep, it took Houska the length of a movie to deliver Watson. Mind blown.

As for pain meds? Houska only got on an epidural with Aubree, which makes sense when you consider that experience marked her first time giving birth.

"I did with Aubree, and I always felt like I could’ve done it without," she explained. "I didn’t like not feeling anything. I didn’t have one with Watson or Layne."

With Watson and Layne we had scares of them coming early. I had to stay overnight in the hospital at 28 weeks with Layne and start meds to prevent early labor. She stayed put until 38 weeks.

Houska also touched on life with her kids, like revealing whether she has a nanny and what it's like managing different schedules.

"Heck no lol we JUST barely even started letting our parents watch Watson for a couple hours," Houska said in response to someone who asked about babysitters.

When pressed about the no nanny thing, Houska joked: "We RARELY go out, no reason to have a sitter. And we are 🚁🚁🚁 parents lol."

Ha! I bet a lot of parents out there can relate to that sentiment.

And when Houska isn't enjoying downtime with her children, she's trying to hustle them out the door.

"Trying to get everyone out of the house on time is a SH*T show lolll," Houska responded when asked about what trips her up as a mom-of-three.

I think it's safe to say fans probably enjoyed Houska's candor here. Hopefully, the mom's supporters will get to hear from her again sooner than later.