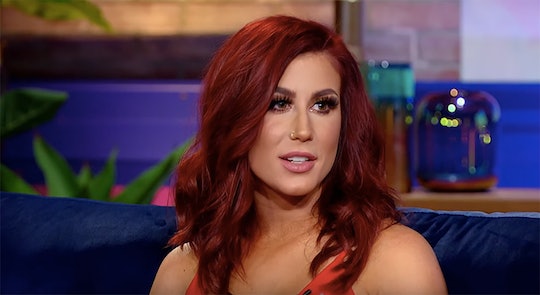 Chelsea Houska's Nickname For Her Daughter Layne Might Surprise You

Teen Mom 2 star Chelsea Houska has three adorable kids, two of which are under the age of 3. It's fair to say Houska has her hands full, especially since she has multiple business ventures and at times complicated parenting dynamics to handle. And in an adorable update about her family, Chelsea Houska opened up about her daughter Layne's nickname, a hilarious moniker which will resonate with youngest children everywhere.

At the time of this writing, Houska is mom to Aubree, 10, Watson, 2, and Layne, 1. Houska welcomed her youngest children with husband, Cole DeBoer, while she had Aubree with her ex-boyfriend, Adam Lind. Houska regularly shares cute updates about her family to social media, but she doesn't always have time to give lengthy updates about her growing brood. So it was a treat on Monday when MTV released a clip from the recent Teen Mom 2 reunion, during which Houska gave updates about all three kids.

"It's just those pre-teen years, you guys," she joked about Aubree. "Attitude and like, they're just never happy. And you try to do things, and they're like this isn't cool anymore." She added, "But she's great, and she's just a good big sister."

Houska then called Watson "so sweet" before dishing on Layne, who she said is a bit unpredictable. "Layne is our wild child, she's naughty, she's feisty," Houska said amid audience laughter.

As for Layne's nickname? It's a funny story. "We used to call her 'sweet baby Layne' — there's a reason why we don't say that anymore. Now it's just 'Laniac.'"

Ha! I think many parents with free-spirited youngest children can relate to this situation. Someone has to keep Houska and DeBoer on their toes, right?

Houska touched on Layne's fiery personality back in August, when the little girl turned 1 on her very own birthday. "I’m so lucky to be able to share my birthday with this tiny little peanut!" she penned at the time. "She's definitely our little sour patch child and keeps us on our toes! The perfect little added spice to our fam...we love you so much hunny girl."

Who knows how Layne's personality will evolve over time, but I have a feeling no matter what, she'll always be stinkin' adorable.