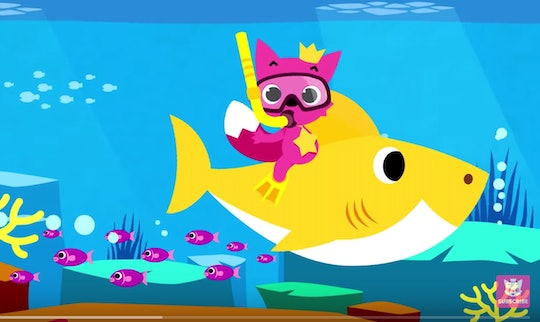 By now, it's probably safe to say that anyone who has come into contact with a young child — parents, grandparents, teachers, caregivers, random people on the street — has heard about the viral kids' music video of the year. Yes, I'm talking about "Baby Shark" (do, do, do-do, do-do). The wildly popular video from Pinkfong has been viewed more than 2 billion times on YouTube. Kids are utterly obsessed. (Which probably has something to do with the fact that once you've heard it, it's essentially ingrained into your brain forever.) And honestly, Chelsea Houska's video of her son and husband dancing to "Baby Shark" will crack you up.

If you're not an avid Teen Mom fan, Chelsea Houska originally appeared on MTV's 16 & Pregnant in 2009 when she was expecting her first child, Aubree, with her ex Adam Lind, according to E! Online. Since then, she has moved on to better things — and partners. Houska ultimately married Cole DeBoer back in October 2016, Us Weekly reported. Currently, she and Cole DeBoer have two children of their own — Watson, almost 2, and Layne, who was born in August of this year, according to ET Online.

Like literally any 2-year-old I've come across, it seems little Watson loves grooving along to "Baby Shark." However, based on a new video the mom of three posted to Instagram, her husband seems equally enthusiastic — and perhaps even more so — than their toddler son. On Saturday, Dec. 22, the Teen Mom star shared a clip of father and son dancing to the catchy song via Instagram. "Who likes baby shark more? @coledeboer or Watson? 🤔," Houska captioned the video. I promise, DeBoer's dance moves will literally make you LOL. Check it out for yourself!

Another Instagram user wrote, "Omg this is so freaking adorable made me laugh 😂."

Yet another person chimed in with, "What an amazing dad he is."

Another follower wrote, "Omg this is the best thing ever." (For the record, I concur.)

To me, Houska's "Baby Shark" video is only further proof that DeBoer is totally rocking it at this whole fatherhood business. Mostly because he doesn't take himself too seriously and he's not afraid to get hands-on with all the kiddos. Want proof? I give you Exhibit A: Picking his nose with baby Watson.

And here's Exhibit B: Learning to braid his step-daughter's hair. Too cute, right?

Which brings us to Exhibit C: Fishing with Aubree.

And just look at the way he's gazing at his brand new baby girl, Layne, in this recent photo. Houska affectionately captioned the Instagram photo with, "This man is so perfect for me." (Awww!)

I have to admit that when my kiddos initially discovered "Baby Shark" and its endless variants, the song would make me cringe after a while. I'm not sure if it's gotten to the point where I'm immune to it, or if I've just given up any hope of escaping it, but like Houska's husband, I've finally fully embraced everything "Baby Shark." Because if you can't beat 'em, you might as well join 'em, right?