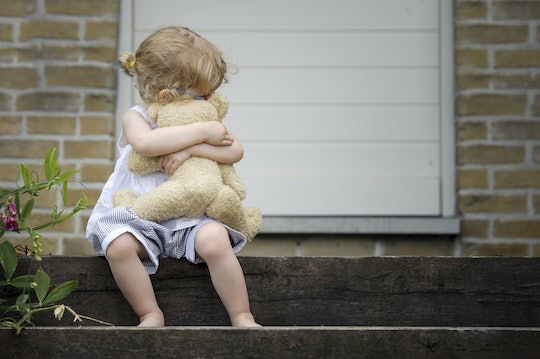 Wondering Why Your Kid Doesn't Have A Lovey? Here's What The Experts Say

In our house, bedtime would not be complete without my son's monster blanket. Even at six years old, he still loves his "monsty," just as much as he did when he was a baby. Monsty is soft, cozy and cuddly, so it's no wonder why his blanket had been his chosen must-have comfort accessory since he was just a few months old. But not all children have a favorite comfort toy, so what if your child didn't attach to a lovey? Here's what that means.

To my son, Monsty has a whole identity. In fact, Monsty is a she (yes — my son assigned her a gender) who brings love, comfort and even magical healing powers for boo-boos and protective powers for scared feelings or nightmares. Seems like something every kid could benefit from, but there's no cause for concern if your child doesn't have his own personal Monsty.

"Not every child will need a lovey," Barbara Harvey, a parent development and early childhood education expert, tells Romper. For children like my son, "a lovey is a self-soothing instrument, [and] not all children use items to self-soothe," Harvey explains. For other children, it's most comforting to be rocked or bounced, and your child's preference often depends on their individual temperament.

For instance, some kids "become attached to a lovey as part of the normal developmental process of separating (either physically or psychologically) from parents," Dr. Amy Webb Ph.D., creator of The Thoughtful Parent, tells Romper. Their chosen comfort toy then becomes a "transitional object" that helps them to feel connected to their caregiver. But if your child has never taken to a particular snuggly toy, you're not alone. Dr. Webb says that only about half of children will attach to a lovey, making it not too uncommon for a child not to have one.

While experts aren't really sure why children attach to a soothing object or not, Dr. Webb says the reason may simply be "temperament or personality preferences." Some children are more naturally "independent, outgoing or extroverted" than others and don't feel the need to have a comfort object to self-soothe. As a young child, I was this way. I never took to a lovey and I've always had a fiercely independent and outgoing spirit, even as a young toddler. My son happens to be a bit of the opposite.

Dr. Webb assures parents that a child's relationship (or lack thereof) with a lovey is not a reflection of the parent-child attachment.

"Most likely, [if your child does not attach to a lovey] it simply means that the child feels comfortable exploring to a certain degree without their caregiver. This, along with a more independently-minded personality, may mean that a lovey isn't needed for him/her to explore on their own," she explains. I think most independent spirits like myself can totally relate to that.

For most children who seem extra attached to their cuddlies, "once a child learns more mature ways to self-soothe, the need for a lovey goes away," says Harvey.

The need, perhaps, but never the love.