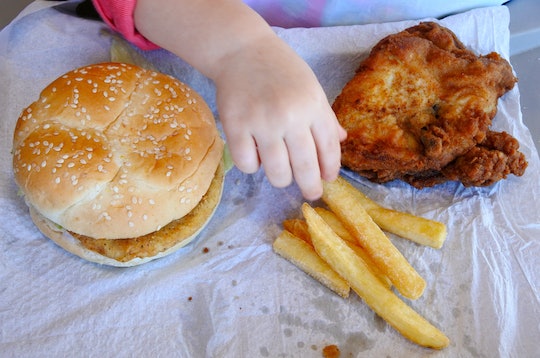 Childhood Obesity In The U.S. Is Getting Worse, Study Finds — Here's What Parents Need To Know

It's no secret that obesity is a serious problem in the United States. In fact, according to the Centers for Disease Control and Prevention (CDC), more than one-third of American adults are considered obese — putting them at risk for serious health problems, such as heart disease, stroke, type 2 diabetes, as well as some forms of cancer. One- third, guys. Perhaps a bigger problem, however, is how prevalent obesity is in our children. According to a new study, childhood obesity in the United States is getting worse, and here's what parents need to know.

To start, let's establish what health care professionals mean when they're talking about obesity. According to the CDC, a person is considered obese if they have a Body Mass Index (BMI) of 30 or higher. BMI is calculated by taking into account your height and weight and a BMI between 18.5 and 24.9 is considered healthy, as a point of comparison.

It seems the childhood obesity problem in the United States is not going away any time soon, according to the new study published in the journal Pediatrics. This study looked at obesity rates across the nation between 1999 and 2016, based on data from 3,000 children in the National Health and Nutrition Examination Survey from the CDC, according to Consumer Reports.

"A few years ago, there was also some hopeful evidence that obesity rates might be declining for preschool-aged children. Unfortunately, our data, looking at the same age group, show this decline now appears to be reversing," Asheley Skinner, one of the study's authors, told CNN. "This is not surprising, necessarily, but is disheartening." Skinner continued:

It tells us that our efforts to improve the health of children is not reaching across the country. We need to improve access to healthy food and physical activity, and do it in a way that recognizes that parents have stressful lives.

Although the study's findings are worrisome, there are steps families can take to battle this issue — and it starts with promoting a healthy lifestyle at home. Here are some ideas to get you started:

As Consumer Reports pointed out, a review of over 40 studies showed that regular exposure to nutritious food aids children in developing an overall healthier preference. Buying fresh fruits and veggies that are in-season — and strategically using produce so it doesn't go to waste — can help cut down on the cost.

Go for a family walk. Find out what sports and activities your kids love doing — and make it fun. (Because kid exercise definitely doesn't have to look like the GIF above.)

Get The Whole Family Involved

Even if just one family member is considered obese, Consumer Reports pointed out it can be beneficial to promote healthy habits for all members of the family. This can help prevent weight-related stigma and keep everyone on the right track.

Talk To Your Doctor

As with any health issue, if you have concerns about your child's weight or need tips for addressing the problem, consult your pediatrician for the best course of action.

"The obesity epidemic threatens to shorten life expectancy in the United States and bankrupt the health care system. Yet progressive weight gain from one generation to the next is not inevitable," Dr. David Ludwig, a professor of nutrition at Harvard School of Public Health, wrote in an accompanying editorial published in Pediatrics. "We have deep knowledge of the biological drivers of obesity, which include poor diet quality, excessive sedentary time, inadequate physical activity, stress, sleep deprivation, perinatal factors, and probably environmental endocrine-disrupting chemicals." Ludwig continued:

What is lacking is an effective strategy to address these drivers with sufficient intensity, consistency, and persistence. The battle against childhood obesity faces many obstacles, most notably entrenched special interests and a "business as usual" mindset. But with political will and collaboration across key sectors of society, we can hopefully, soon, begin to end this worsening epidemic.

Clearly, the childhood obesity problem in the United States is not improving — even though it's a known problem. And the fact that it's actually getting worse is definitely a cause for concern. Hopefully this latest data will help bring about change in how our society approaches this public health crisis. Because as parents, we innately want our kids to lead healthier, longer lives than we us.

More Like This
Can Elderberry Help Prevent Illness In Kids? Doctors Weigh In
What Is RSV?
The Best Halloween Family Pajamas To Match Your Boos
What Parents Need To Know After DEA Issues Warning About "Rainbow Fentanyl"