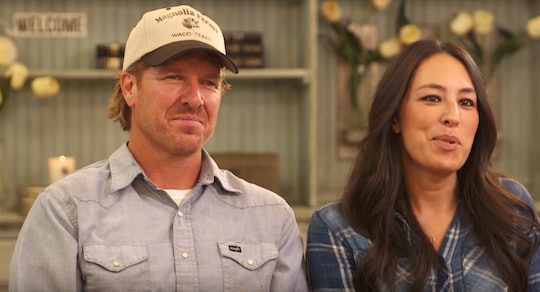 It takes a lot for a husband and wife to work and go into business together. There has to be a level of trust, respect, and love to exist to be successful, both in marriage and career. But sometimes it can become too much. Chip and Joanna Gaines, stars of HGTV's Fixer Upper and home renovators know this to be true — but fans are worried about the couple. On Friday evening, Chip Gaines responded to divorce rumors floating around the internet, reassuring fans that it will never happen. Thank god.

Anyone who has ever seen Fixer Upper knows that the Gaines' relationship is as solid as the foundation in the homes they renovate. But appearances aren't everything, which could be why fans were speculating on Twitter about a rumored split between the couple. All of that talk must have gotten to Chip, who took to Twitter to finally address all of the rumors. "I'm so sick of these 'stories' claiming Joanna and Chip are breaking up," Twitter user Liason_TRTN tweeted on Friday. "Leave this couple alone they are wonderful together."

Chip took notice of this tweet in particular (I guess I'm not the only one who obsessively checks my mentions) and decided to respond and dispel the divorce rumors in one fell swoop. "Won't ever happen..you can take that to the bank! #loveOfMyLife," Chip tweeted in reply.

They've certainly taken their love (and their business) to the bank (the couple has a reported net worth of over $5 million), thanks to their partnership, keen eye for design, and the ability to brand almost anything. Their marriage is a literal worthy investment not worth throwing away any time soon.

But even if they didn't have the money or fame, and were just ordinary business owners in Waco, Texas, it is likely that they'd be just as in love as they are today. Their love story is a timeless tale that all fans know by now — they met in college while Joanna was working at her father's tire store and Chip was a customer. According to Country Living, Chip fell head over heels for his wife as soon as they met — and Joanna cites that the reason she knew Chip was "the one" was because she could trust him. 14 years of marriage and 4 children later, they're just as strong as ever.

Chip and Joanna love each other more than they love using shiplap in their home remodeling projects. There is no need to worry about them splitting any time soon.