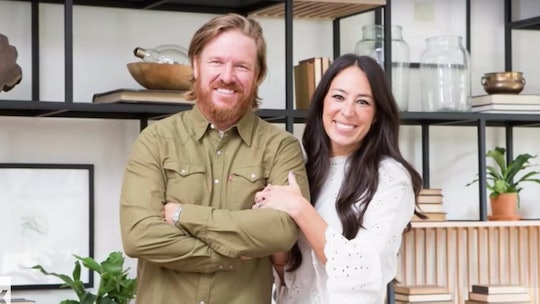 Chip and Joanna Gaines won the hearts of millions across the nation with their beloved HGTV series Fixer Upper. After five successful seasons, the dynamic duo proceeded to shatter everyone's hopes and dreams when they announced the show was ending back in 2017. Re-runs have allowed dedicated fans to get their "fix" since the duo stopped filming. But now? It looks as if they'll be making a big return to your living room in the near future after all. That's because Chip and Joanna Gaines getting their own TV Network has fans screaming with delight.

The exciting announcement came during an appearance on The Tonight Show Starring Jimmy Fallon on Friday, Nov. 9, as E! Online reported. “We signed a non-disclosure and it said quote unquote you can tell your mother but that’s it,” Chip told Fallon after the host asked if he and Joanna would ever consider returning to TV. “So mom, I just wanted to make a quick announcement, we are coming back to television. You are going to get to see the kids grow up, you are going to see us, well maybe a six-month delay like the rest of the world, but we are excited to be back.” He went on to explain:

I think we’re really going to carve it out in a way that really makes sense to us and our families. It’ll be filmed a lot in Waco, Texas, so we don’t have to travel a whole lot. All things being equal, we could not be more excited.

Additionally, Magnolia spokesman John Marsicano confirmed Chip and Joanna's upcoming network to People. “We’re excited to share that we are currently in the early stages of talking with Discovery about a lifestyle-focused media network for Magnolia," Marsicano told the publication. "The details surrounding this opportunity remain a work in progress, but together, our hope is to build a different kind of platform for unique, inspiring and family-friendly content.”

Joanna also teased the big news via Instagram ahead of The Tonight Show's airing, writing, "Ummm @chipgaines may or may not have gotten a little ahead of himself and let the cat out of the bag about something big... watch on @fallontonightat 10:35 CST!"

Now that the news is out there, it's safe to say fans are over the moon about the fact that Chip and Joanna are getting their own network. One Twitter user wrote, "24 hours of @chipgaines and @joannagaines !?!?!?!? Christmas has indeed come early!! CAN. NOT. WAIT!!!! "

Another person tweeted, "Chip and Joanna Gaines are starting their own TV Network!!! Dreams do come true."

Yet another Twitter user chimed in with, "Well our tv will finally have a new channel to leave it on forever."

As Today reported in September 2017, Chip and Joanna made the decision to end their popular show Fixer Upper in order to focus on their family. "We have poured our blood, sweat and tears into this show," they wrote on Joanna's blog. "We would be foolish to think we can go and go and fire on all cylinders and never stop to pause." The couple added:

This is just us recognizing that we need to catch our breath for a moment. Our plan is to take this time to shore up and strengthen the spots that are weak, rest the places that are tired and give lots of love and attention to both our family and our business.

Since ending their HGTV series, Chip and Joanna welcomed their fifth child — a son named Crew — in June. (So they're definitely going to have their hands full!)

At this point, it's unclear what the timeline for Chip and Joanna's new network is going to be. (However, judging by Joanna's reaction, Chip might have spilled the beans pretty early on in the process.) So fans might be waiting a while yet for everything to get started. Still, you have to admit: That Chip & Joanna Gaines are even planning a return to TV is a pretty awesome early Christmas present in itself.