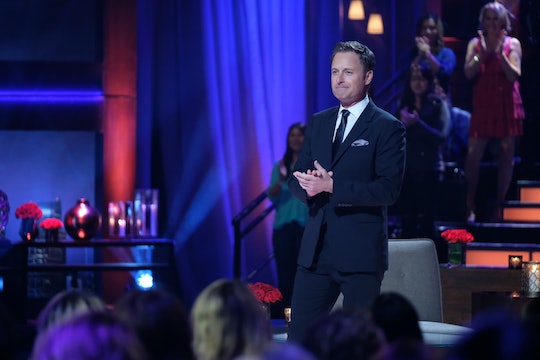 When the tagline for Colton's season of The Bachelor had to do with his virginity and Chris Harrison wouldn't shut up about it during the season premiere, fans knew it would be a running theme. Unfortunately, it has been Colton's "thing," but now that his season is ending it means the jokes will finally go away. And according to Twitter, Chris Harrison's virgin jokes on The Bachelor need to end more than ever.

I get that Colton being a virgin was the running theme of the season, but even he had to be sick of the jokes by the time the finale rolled around tonight. On the finale Chris had what was essentially a roundtable about Colton's virginity with some Bachelor veterans and fans on Twitter are over it.

As with any season of The Bachelor, it should really be the business of the Bachelor and his contestant if they had sex in the fantasy suite. But Chris seemed to be chomping at the bit to find out of Colton had finally lost his virginity with Cassie. As one Bachelor fan pointed out, would the focus on his virginity have been so extreme if he was a woman?

Chris said that it was "the answer everybody's been dying to know," but at this point, I think fans are over Colton's virginity. If he had a good fantasy suite date with Cassie and they grew closer because of it, that's all that should matter. The good news is that Chris can shelve his virginity joke book now that Colton's season is over.

If it wasn't enough that Colton had to talk about his virginity on The Bachelorette and Bachelor in Paradise, he was essentially grilled on his own season of The Bachelor. Again, I get it that Colton's season's theme was his virginity, but enough with the jokes already.

Maybe The Bachelor producers are more to blame than Chris for all of those terrible virgin jokes this season and, especially, during the two-night season finale. But even if that's the case, fans are so over Chris's virgin jokes and hearing about a grown man's sex life period.

Luckily, Colton has been a good sport about all of the virgin jokes this season, although I guess he really had no choice but to embrace the one thing he has been known for in Bachelor Nation. I get that it was a big deal because virgins are relatively uncommon in Bachelor Nation, but hopefully now that the season is over, he can move on from all of the terrible jokes.

Chris's virginity jokes have ranged from awful to almost inappropriate to just plain cringe-worthy. I don't know how Colton took it all in stride, but I have a newfound appreciation for him for that alone. And hopefully he is the last virgin Bachelor for the next few seasons, because I don't think fans could handle another entire season of Chris embracing his inner junior high schooler.