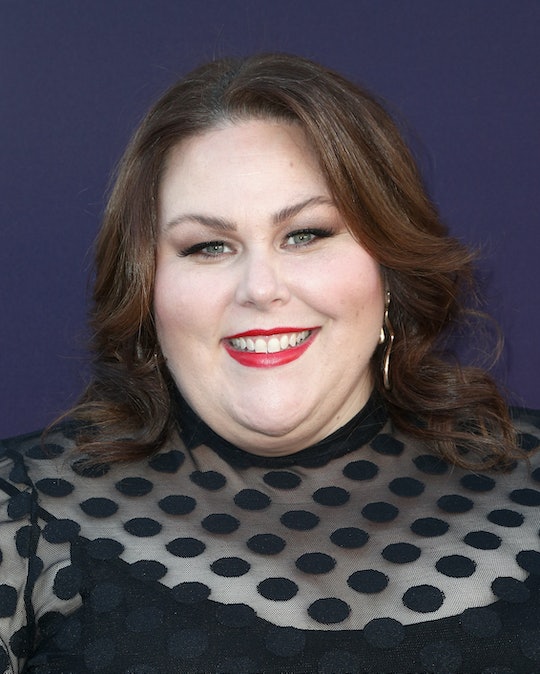 As if you needed any more reason to love and adore the cast of This Is Us both on the show and IRL, Chrissy Metz's reaction to her 2018 Golden Globes nomination will probably do it for you. The actress was a bona fide breakout star during the show's first season and so far for Season 2, Metz has definitely been bringing her A-game. And while Metz is a huge talent all on her own, she was quick to give a Twitter shoutout to her co-star and TV brother, Sterling K. Brown, who also earned a 2018 Golden Globe nomination for his role on This Is Us.

Before This Is Us, Metz had smaller roles on My Name Is Earl and Huge, but had a big break during American Horror Story Season 4 when she was part of the Freak Show arc. However, her biggest role yet, by far, has been portraying Kate Pearson on This Is Us, though, she still seems totally humbled by the fame and recognition the role has brought her. Like I said, if you didn't already adore her, you kind of have to now.

Metz is up for the Golden Globe Award for Outstanding Actress in a Supporting Role in a Series, Limited Series or Motion Picture Made for Television. Her competition in the category includes the likes of Laura Dern and Michelle Pfeiffer, so it's unclear if she's going to take the award home this time around, but something tells me that Metz is just excited to be included among all of these talented nominees.

This Is Us also received a nomination for the 2018 Golden Globes for Best Television Series — Drama, but Metz and Brown are the only actors from the series who've received recognition this time around, but they're certainly deserving of all the love. During This Is Us Season 1, Brown's character went through a lot while losing his birth father and then having a nervous breakdown at work. Meanwhile, Metz's Kate worked through her issues of losing her dad, showing off some of Metz's serious acting chops.

And since This Is Us is the most tear-inducing show on TV right now, of course our dear characters couldn't have it easy going into Season 2. For both Metz and Brown, their characters have been tested yet again, which makes their nominations well-deserved. But you don't have to tell Metz that.

During Season 2 of This Is Us so far, Metz has been challenged quite a bit more than she might have been during the show's first season, even though her character has already gone through a lot. Near the end of the first part of Season 2, though, Kate suffered a huge loss when she — spoiler alert — had an early and very much unexpected miscarriage.

"I remember getting this script and [thinking], 'Okay, oh wow.' It was a challenge and important," Metz recently told Extra at the Hollywood Foreign Press Association and InStyle celebration of the 75th anniversary of the Golden Globe Awards. "There is a lot of shame surrounding miscarriage, and a lot of women, and people generally feel it's their fault, and it's very natural."

So if Season 1 made Metz deserving of some award nominations, Season 2 is already challenging her in ways that make her 2018 Golden Globe nomination plenty earned.

Metz also regularly live tweets along with fans during new episodes of This Is Us and has proven time and again how devoted she is to the hit NBC series. I won't say the show would be nothing without her, but it definitely wouldn't feel the same.