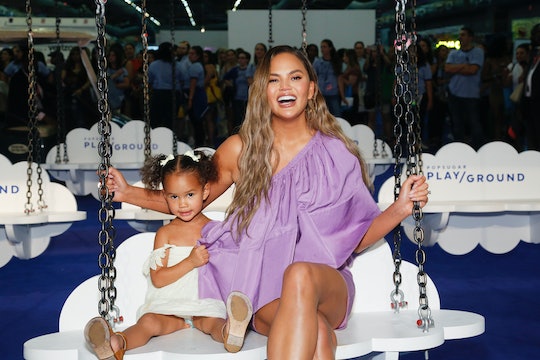 Chrissy Teigen is a woman of many talents, all the way from her hilarious jabs at President Donald Trump to her cooking. And as it turns out, Teigen is also skilled in the dance department. Want some proof? Look no further than this video of Chrissy Teigen and Luna dancing to The Nutcracker.

Although the holiday season is still a few months away, Teigen and Luna decided to get festive early by dancing to a song from The Nutcracker. The author shared the moment to Instagram Monday, a clip which features Luna in a pink tutu dress and Teigen in a floral robe. And as the iconic tune plays, Teigen gives her best impression of a ballerina (beautifully, I might add), while Luna jumps and prances around.

Although the dance isn't very traditional, per say, it gets an A+ for creativity. What do I mean, exactly? Well, at some point in the video, Luna starts tweeting and flapping her arms around like a bird, a move her mom ultimately mimics. Hats off to little Luna for her modern interpretation of this classic.

Similarly to myself, many people were impressed with Luna and Teigen's artful performance.

Another person added: "The video I didn’t know I needed. Love this so much. Luna flapping her hands is the cutest thing ever."

This isn't the first time that one of Teigen's kids has gotten creative. Just the other day, for instance, little Miles joined in on the piano with his dad for a duet.

And there's all of Luna's hilarious moments, like when she gave her hot take on 90 Day Fiance or her amazing story about a "Witch Baby." Talk about one creative little girl, right?

Of course, I got to give Teigen and Legend props for always encouraging their kiddos' imaginations. Teigen spoke on this topic shortly after Miles was born, explaining, according to Good Housekeeping:

The biggest difference between one kid and two is finding that balance in between giving that special quiet time to your baby, and then having that rambunctious playtime where you really have to be on your toes. A lot of people, including us, overcompensate by wanting to make sure that that first child doesn't feel neglected. But it's also necessary because they're going a different stage, and they need more attention and stimulation.

It's great to hear Teigen is so active kids, especially since Luna doesn't sound like a kid who likes to take it easy. "Luna wants a say in things," Teigen added. "She's very dramatic. It's like a big show, but it's fun, because they're both a little kooky. I like the chaos."

Yep, if anyone can handle the chaos, it's definitely Teigen. Not only does she go with the flow, but she's clearly down to let her silly side out for the sake of her precious family. And with that being said, please keep The Nutcracker-inspired videos coming, mama.