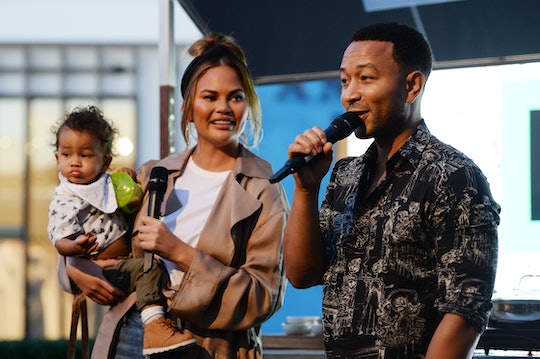 Peanut Butter the hamster has a new buddy now that Chrissy Teigen got her son Miles a bearded dragon ahead of his second birthday. And things seem to be going well so far, though the family's new pet still needs a name.

"Yes, I am now a proud bearded dragon owner!" Teigen announced on Twitter Wednesday. "He is very little right now — I got him for Miles' birthday but I know we will share a lifetime of happiness and cuddles (well his lifetime) (maybe mine at this stress rate)."

Miles' new bearded dragon is "so tiny," according to Teigen, and doesn't have a name for the time being. She revealed that Miles will get to name him when he turns 2 on Saturday. "So I'm guessing his name will be 'Cars'," she joked on Twitter. I mean, hey, "Cars the Bearded Dragon" does have a nice ring to it.

On Wednesday evening, Teigen posted photos of Luna and Miles spending time with their new pet and the soon-to-be birthday boy looks especially excited. Just look at the smile on his face...

According to Reptiles Magazine, a bearded dragon is actually one of the best pet reptiles for kids because they don't require too much space, they're low maintenance, quiet, and can help teach kids responsibility. Bearded dragons can grow up to nearly two feet in length and can live for up to 10 years or more in captivity.

Beyond Teigen, Miles, Luna, and John Legend, the family's unnamed bearded dragon is in good company. Teigen and Legend also have two french bulldogs, Penny and Pippa, a bulldog named Pablo, a poodle named Petey, and a hamster named Peanut Butter, who Teigen got for Luna last year.

Given how much Teigen has already tweeted about their bearded dragon, it's likely that this new pet will get the same super star treatment as their other pets. So stay tuned to her social media for the pet's name and their adventures that are sure to follow.