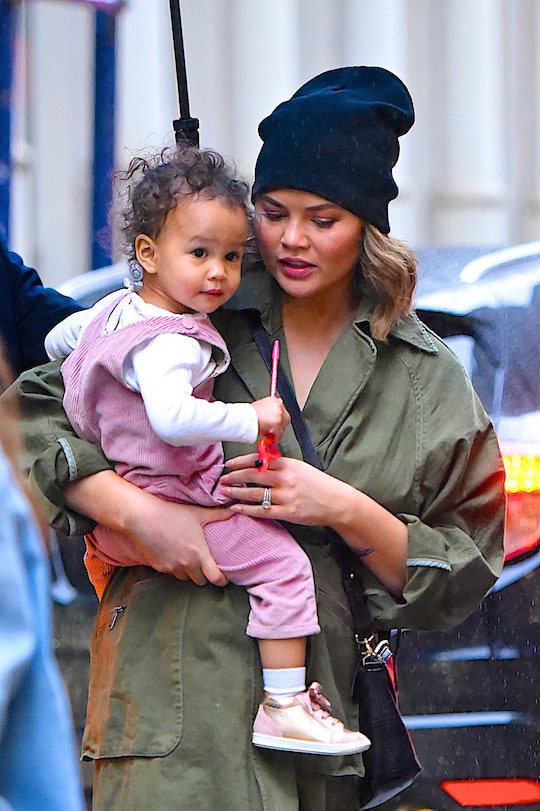 Chrissy Teigen Put On A Play With Luna About A Dog Wedding, Lots Of Farts & An Injury

Sometimes playing with kids can get a bit boring. I'm sorry, but this is the God's honest truth. But thanks to wonderful humans like Chrissy Teigen, who put on a play with her daughter Luna featuring some toy bulldogs, parents can get some adorable inspo. Honestly, their little show was so entertaining and endearing, it could probably be a full-length feature film I would pay real dollars to see.

The Cravings cookbook author is mom to 3-year-old daughter Luna and 20-month-old son Miles with her Grammy-award winning (and People's 2019 Sexiest Man Alive, never forget) husband, John Legend. Now that Teigen is past the baby years with her daughter, she is getting really into creative play with Luna. And fortunately for both Teigen and Luna, being creative never seems to be much of an issue for either of them.

Indeed, all the two of them seem to need are two adorable toy dogs dressed up in wedding clothes and then simply give them free reign. On Monday, the day after Teigen and Legend were at the Grammys and presumably up pretty late, this dedicated mom spent some time hanging out with her little girl putting on a play that starts as a wedding of two pups and ends as something else entirely.

The play begins with Teigen taking on the role of the disgruntled groom who is justifiably upset because his new bride (voiced by a giggling Luna) has "just come in here and fart all over the place."

In the next scene, Luna apologizes as the dog bride and Teigen instantly forgives her as the dog groom. Until Luna's dog bride, apparently named Pippa, decides to fart on her groom again. Talk about pushing your luck.

Sadly, the play had to go into a brief intermission when the Pippa's legs came off in a horrific "oopsie." Teigen promised to super glue it back on, but Luna had her doubts, claiming "that will never work."

It seems she was wrong, the super glue did work and guess what? The injury brought these two love dogs even closer together. Luna closed out the play with a beautiful scene where the injured bride apparently said: "I was so happy you were taking care of me and I was taking care of you. And now we need some babies."

This play really was an emotional rollercoaster, as John Legend indicated when he commented with a bunch of crying emojis. The conflict, the injuries, the reconciliation.

Hopefully coming to a theater near you sometime soon.