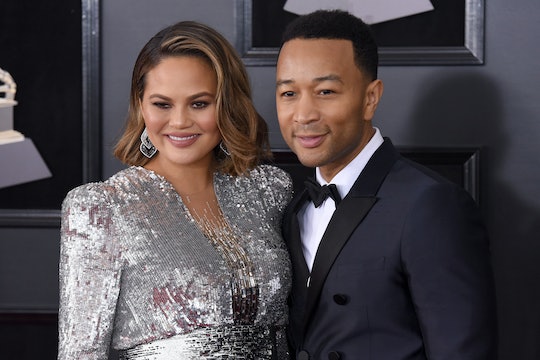 While she and John Legend spent last year's biggest night in music lounging on their couch and entertaining themselves at home, it looks like Chrissy Teigen will be going to the 2020 Grammys. Yup, the mom of two, cookbook author, and Queen of Twitter will soon hit the red carpet at the 62nd annual Grammy Awards in a dress she can't wait for social media to "hate."

Legend, who's been nominated for a total of 31 Grammy Awards since 2005 and has won 10 of them, is nominated in two categories in 2020: Best Traditional Pop Vocal Album for his Christmas album, A Legendary Christmas and Best Rap/Sung Performance for his collaboration with DJ Khaled and the late rapper Nipsey Hussle. And, don't worry, it sure sounds like Teigen will be by his side on Sunday night, as she shared on Saturday via Twitter that she "found a Grammy dress," which will obviously be gorgeous. But as she's the Queen of Twitter and a veteran celeb, she knows it won't please everyone. "hope u hate it. like to keep u busy," she tweeted.

Even though she's ready to go tonight, Teigen also shared that she can't wait for the night to be "over with" so she can stop stressing about her Grammys look. "I have been doing a lot to fit into the dress and would like to get tomorrow over with because a b*tch is CRANKY for gravy," she hilariously wrote on Twitter last night.

Last year, Teigen and Legend were MIA at the Grammys as they were busy snoozing on the couch. At the time, Teigen took to Twitter to joke that her husband won an EGOT (Emmy, Grammy, Oscar, and Tony) that year, so "egot lazy". Teigen still live-tweeted during the show, though, and even posted a not-going-to-the-Grammys makeup tutorial on Instagram and had her famous friends "babysit her kids" while she danced along to the live performances on TV.

This year, though, it sounds like we can expect some memorable red carpet moments and hopefully hilarious camera pans to Teigen in the audience on Sunday night. Who knows, maybe Luna and Miles will make an appearance too?