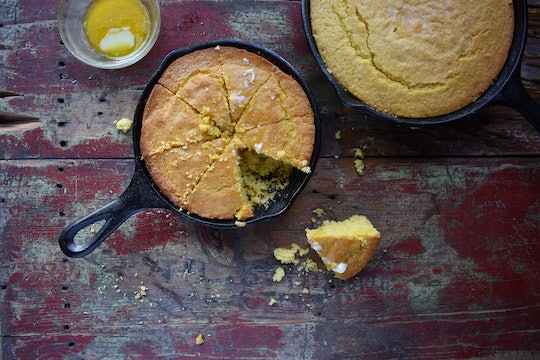 If you’re tasked with bringing something to Thanksgiving dinner, then look no further than Chrissy Teigen's cornbread recipe, the perfect holiday side dish. Not only is Teigen one of the funniest people on Twitter, she's also one of the most talented chefs: Her cookbook Cravings is filled with recipes that you'll want to make again and again.

Let’s get one thing out of the way: Chrissy's cornbread recipe is cooked in a mixture of bacon fat and butter, so you know it’s going to be a crowd-pleaser. This is not the kind of cornbread you find in a grocery store mix which seems full of promise when it’s in the box, but ends up (at least in my experience) dry and crumbly and somehow in tiny pieces all over the floor.

Instead, Teigen’s recipe uses butter, bacon fat, creamed corn, and buttermilk to keep the cornbread rich and moist, almost more like a cake than a bread. While delicious, the final product does have a distinct bacon flavor, so if that’s not your thing, feel free to go lighter on the meat (the recipe calls for six strips, but you could cut that in half). A mix of cheddar and parmesan paired with zingy pickled jalapeños and a touch of black pepper add a ton of savory flavor to a classic dish.

It serves six to eight, and for larger gatherings, you can easily double the recipe (in fact, you may want to double it anyway because people are probably going to want seconds). For the easiest one-pan clean up, slice and serve the cornbread right in the skillet after letting it cool for ten minutes. Just make sure that your host is cool with this unassuming Thanksgiving side dish totally upstaging the turkey.

The only downside to making this cornbread yourself is that you won't have Luna as your cooking partner.