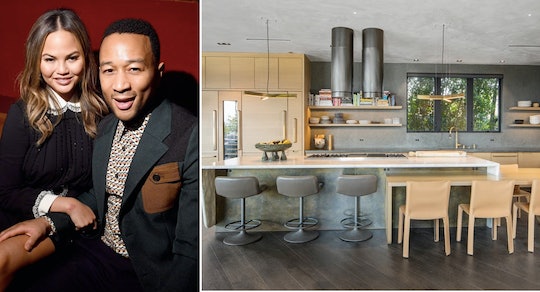 My Word, These Photos Of Chrissy Teigen & John Legend's $24 Million Home Are Stunning

Just in case you've got roughly $24 million burning a hole in your pocket or hidden in between your sofa cushions, you may be interested to know that Chrissy Teigen and John Legend's house is up for sale. And let me tell you, based on the jaw-dropping professional photos of their Beverly Hills abode, the couple's home ain't too shabby.

While Teigen, who's pregnant with the couple's third child, has offered a few glimpses inside her living room and kitchen when she posts on Instagram and Twitter over the years, TopTenRealEstateDeals.com recently shared a detailed listing for the couple's "stylish Beverly Hills" 8,520 square foot home that's on the market for $23.95 million, including a batch of photos to salivate over.

Teigen and Legend's home, which went on the market earlier this year, as the Wall Street Journal reported, features seven bedrooms, eight bathrooms, and a chef's dream kitchen where so many of the Cravings cookbook author's fans have watched her and Legend create incredible meals. Like the musician's "LEGENDary" fried chicken and Teigen's spicy miso pasta.

And let's not forget that Teigen was a model for many years before switching gears, and isn't it fun to imagine that she practiced her moves on the second-floor catwalk while her husband provided background music sitting at his purple grand piano?

The view out the living room windows beyond the catwalk is breathtaking as well.

And when it's time to eat dinner, guests can head on into the dining room highlighted by mandala-patterned ceilings from Thailand, according to TopTenRealEstateDeals.com.

At the end of the day, Teigen and Legend can retire to the master bedroom, complete with fireplace, deck, and canyon views. Also let's not forget her need for night eggs, which she could covertly eat in either of these two comfy chairs without disturbing her husband.

What about her closet, you ask? Is the poor woman digging through bins and fighting with old broken hangers and such? Please now imagine yourself slowly spinning with your arms spread wide in this dream space.

After a long day of cooking and raising kids and taking down trolls on Twitter, Teigen surely deserves a good soak in the tub and this glorious master ensuite should suffice.

Teigen's social media followers know this woman loves herself some quality television and has often hunkered down on the couch for some serious Bravo time in her family room right beside the kitchen, which should make access to late night snacks a lot easier.

Feel like dining al fresco? Teigen's outdoor dining space looks like it's straight out of a romantic comedy set in Tuscany.

There are no words for their pool area. That furniture.

Teigen's house is an architectural marvel that looks both comfortable and elegant at the same time.

Someone buy it before I take out a hefty mortgage.