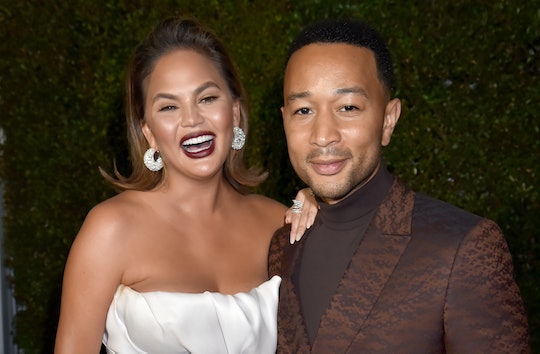 Chrissy Teigen is considered something of a trendsetter — ahem, we all know and love her Headband of the Day viral sensation, aka #HBOTD — so seeing that she's sporting a new pair of leggings with John Legend's face right on the butt makes me think we're all going to start wearing our partner's face on our booties, too.

On Thursday, Teigen — mom to 3-year-old daughter Luna and 21-month-old son Miles — shared a photo of herself on Instagram wearing some slick new leggings that had apparently been sent to her. The leggings featured some retro looking orange and white stripes climbing up the sides of her legs, and those stripes curve up to her butt, where they change into a heart shape on each cheek with her hubby of nearly seven years, John Legend, smiling placidly at the end. Like a pot of gold at the end of the rainbow, if you will. I guess once you're married to People's "Sexiest Man Alive," as Legend was crowned in 2019, it isn't the worst idea to walk around with his face plastered across your booty.

"we get ... really random stuff sent to the house," Teigen captioned the photo.

To be fair, I wouldn't call leggings with your own husband's face on the butt "random." The leggings were specifically for Teigen, as it turns out, because the gifter was Queer Eye's Antoni Poroski. "I'm happy you're enjoying them," he commented on the post, and she clearly does seem to be.

This isn't the first time Teigen has happily donned some clothing featuring her husband's face. After it was announced that Legend was indeed People's "Sexiest Man Alive" back in November, Teigen shared a photo of herself posing alongside two friends in pajamas decorated in the People magazine cover with Legend's face.

Teigen is pretty wise with her husband-related fashion choices, in my opinion; she keeps it pretty comfortable with the pajamas and the leggings, and also very unique. A lovely homage to the man she loves, I guess. Because if you're going to walk around with someone's face on your butt, you probably want it to be someone you love.