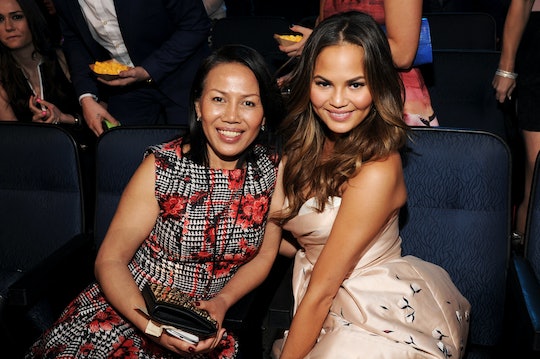 Losing a baby after struggling with pregnancy complications is something no parent wants to suffer through. And when it happens, the entire family is affected. Chrissy Teigen's mom's emotional post after her pregnancy loss highlights that everyone involved was heartbroken over the loss.

Vilailuck "Pepper Thai" Teigen lives with her daughter and son-in-law John Legend in Los Angeles, California. She's a huge part of their daily lives along with their two children, 4-year-old daughter Luna and 2-year-old son Miles. She was also on hand when the couple's third pregnancy ended with a tragic loss.

In an emotional video Vilailuck shared on Instagram on Friday, she paid tribute to the baby boy her Chrissy and John had named Jack. If you've ever paid attention to her social media feed, Vilailuck Teigen is one heck of a grandmother, so you can imagine that this loss was a terrible one for her as well.

The video sees Vilaluck saying goodbye to Jack in tears, and she also included a photo of herself holding the baby while wearing a protective face mask. She looks truly heartbroken, and as the grandmother wrote in the caption of her post, "My heart aches love you so much baby Jack."

Several social media users offered their condolences to the devastated grandmother, with one noting, "A daughter's loss is a mother’s loss... " Another wrote, "Pepper, you are such a loving mother & grandmother. I know your family needs you now more than ever, so sending all my love & strength to you."

Vilailuck's post came the day after both Legend and Teigen shared the news of their loss on their social media accounts with a statement which read in part, "We are shocked and in the kind of deep pain you only hear about, the kind of pain we’ve never felt before. We were never able to stop the bleeding and give our baby the fluids he needed, despite bags and bags of blood transfusions. It just wasn’t enough."

The couple went on to explain that they had named their son Jack, and included a beautiful message for him, "To our Jack — I’m so sorry that the first few moments of your life were met with so many complications, that we couldn’t give you the home you needed to survive. We will always love you."

The loss of their baby due to pregnancy complications was their "darkest day," as Legend and Teigen wrote on social media. But hopefully the continued support of their friends and family will help them all get through this together.