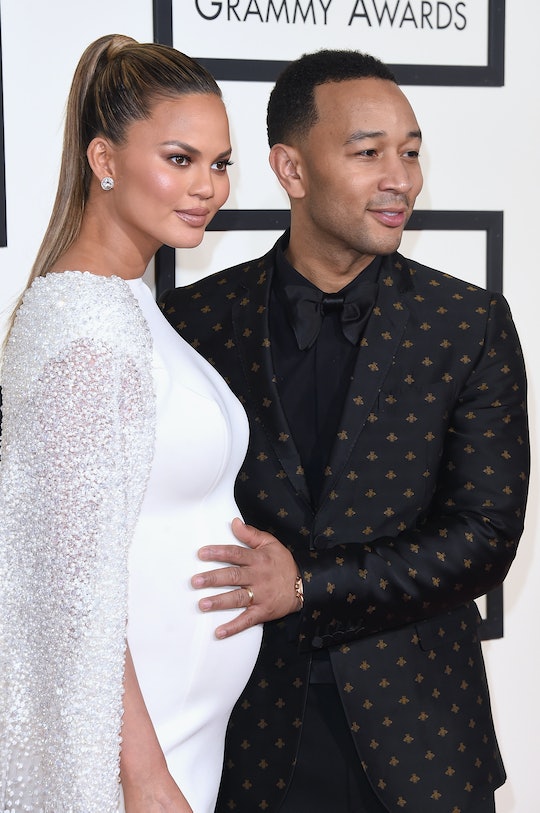 Lovers of the House of Teigen-Legend, rejoice. Today was a good day. Instead of being ripped on social media for her various parenting choices, Chrissy Teigen's photo of John Legend wearing a baby carrier has received little praise-hand emojis all around. In fact, even Page Six, The New York Post's legendarily snarky celebrity gossip page was happy to share a picture of Teigen and Legend taking a stroll through New York City this weekend, with Teigen lugging a diaper bag in knee high boots and John Legend carrying baby Luna in a carrier. The newspaper captioned their photo, "DILF Alert!" and added that Teigen had put Legend on "daddy duty" for the day.

Teigen subsequently reposted another shot of the couple, taken on the same day but in a different location, strolling in all of their new parent-glory and stole the gossip page's lingo. "Get it, dilf!" she wrote. Not only is it nice that she and her husband are able to joke around about how good Legend looks with Luna attached to him, it's nice to see any positive commentary from the peanut gallery about this couple and their newborn.

Seriously though, it's refreshing. Teigen, probably just because she was so active on social media to begin with, has been dealing with a lot of hate about most of her choices since even getting pregnant and it's all starting to get old. A DILF alert is just what the Internet (and probably the couple) needed on Monday.

Just last week, the new dad took to Twitter to defend his wife amidst all the Mommy War comments. "Shame both of us so Chrissy doesn't have to take it all. We'll split it," he tweeted, after Teigen was slammed for daring to go out to dinner with her husband.

Can you imagine how stressful it must have been that her husband felt the need to step in and referee the Internet? Sure, there's an argument that just the mere fact that she's a celeb and open on the Internet about her real life opens her up to criticism. But Teigen has been taking hits over the silliest of things. And things that get right to the heart of the cisgendered co-parenting double standard.

When She Went To Dinner Without Her Infant

This was the night that Legend referred to in defense of his wife. I'm not even a mom and sometimes I would like a nanny to take care of my business so I can go out to dinner. Don't be jealous. Everyone does things their own way.

When She Made Eggs In A Crop Top

This woman is celebrating Mother's Day by making eggs, something the cookbook author probably enjoys, in her jean shorts. What's good, haters?

When She "Embryo Shopped"

Like this wasn't something she probably talked about with her husband. Some commenters lamented that they couldn't afford such a luxury. And that's very true and very frustrating. But calling it a "slap in the face" of women, as if it was just her decision is a little out of line.

Many of the complaints about Teigen's choices revolve around the same thing — anger that her privilege allows her luxuries most families just don't have. But they also revolve around Teigen, alone, somehow making choices that her husband didn't take part in. Even the caption from The New York Post that she "put" Legend on daddy duty shows this bias. Given Legend's own words last week in asking for some shame he could split with his wife like cheese dip, it sounds like he and Teigen seem to have this partner thing down.

Could it be that Legend wanted to have Luna close to him for their walk? Like any other parent? Come on, Twitter, it's obviously a give and take relationship. They're both calling the shots here and it's fun to watch. Please stop hating on them — because a world without John Legend DILF shots and Teigen tweets about the trials of breastfeeding is just no fun.