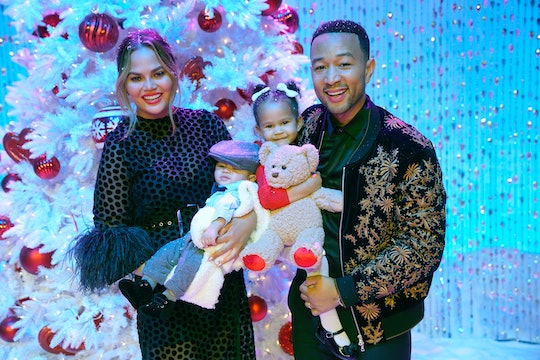 It truly is the moment every parent of more than one child looks forward to: when your kids connect. I mean really connect without you there forcing them to like each other. Not every parent is lucky enough to capture the transformation on video, but Chrissy Teigen happened to be one of the lucky few. Over the weekend, she shared a glorious little video that proves her daughter Luna really "loves" her brother Miles and the whole moment clearly brought her some deep mom joy.

Teigen and her EGOT-winning husband John Legend share two of the sweetest kids on the internet, 3-year-old daughter Luna and 20-month-old son Miles. While both Teigen and Legend are incredibly talented people who have earned their legions of social media followers by way of being amazing, their posts of their hilarious kids have become reason enough to follow them. Especially if Teigen happens to share a two-fer including both Luna and Miles as she did on Sunday.

It seems the siblings, who are just two years apart in age, have found their footing as pals. And their mother celebrated this historic moment with a short video of Luna trying to help Miles climb up some steps in their backyard playhouse with the caption: "Took almost 2 years but she loves him now!"

In the video, Luna is trying to coax Miles over to her by using that sweet voice everyone reserves for little children, calling "Miles! Come! Come! It's OK!" until he toddles over and reaches for her hand. They struggle to connect their fingers but the point is they're both trying. And as so many of Teigen's followers noted in the comments section, there is something extra sweet and special about their efforts.

"Sometimes the bond that takes the longest to grow strong lasts longest," one fan commented, while another noted that Luna used a certain kind of voice to summon her little brother, "Classic older sister (says an older sister herself) calling the younger brother like a puppy."

Now to be fair to Luna, this isn't the first time she has been caught on social media giving her little brother some love. When the family was on holiday in Jackson Hole, Wyoming in December, the two kids shared a special dance for a "fried chicken party."

The Cravings cookbook author has said in the past that her two children have very different personalities, so it certainly makes sense that they might take some time to find a good connection.

But now that they've found it, fair warning to Chrissy Teigen and John Legend: it might not be long before they start teaming up together. And that will be an entirely new ball game.