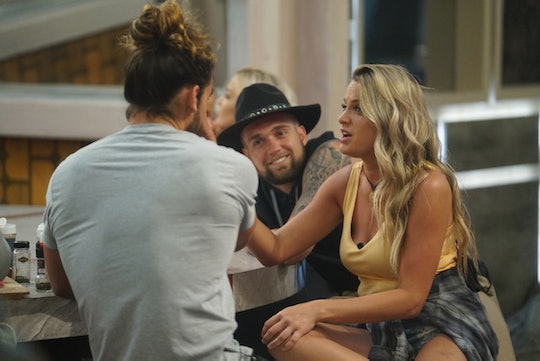 Christie Went Against Her Alliance On 'Big Brother'

The only thing worse than getting stuck with a useless power on Big Brother is winning a powerful one, but never using it. Last season, that happened with Tyler’s Cloud Power App and then this season with Ovi’s Whacktivity Power which left the house with him. Now, Christie didn't use her power on Big Brother and it could have been her worst move yet. Not only because the game is always a lot more interesting when twists are thrown in the mix, but also because she went against what Michie and the rest of her alliance had urged her to do at the latest Veto ceremony.

If Christie had used her Diamond Power of Veto, then she would have given Michie the opportunity to put someone of his choosing on the block in his place rather than have Cliff choose the replacement nominee. Even though Cliff put Becca on the block, which is one of the players the Six Shooters wanted to get out anyway, Michie and the others might see Christie’s move as one that went against their alliance.

During Wednesday’s episode, Michie pestered Christie to use her power at the Veto ceremony, and on the live fees, it was a lot worse. Michie wouldn't let up and it became a high pressure situation wherein Christie likely felt as though she didn't have control over her own power that she earned. In the end, she did what was best for her game and she didn't use it, but at what cost?

Christie had agreed to use her power on Michie when she thought he was going to be the only member of the Six Shooters on the block for eviction. Then, she learned that Jack was also on the block and it complicated things. She would have proven her loyalty to her alliance by using her Diamond Power of Veto regardless, but it was hard for her to choose what to do and who to help out, especially with her alliance in her ear at every turn.

But the Six Shooters, namely Michie and Jack, don't take kindly to betrayal and they might see Christie holding back on using her power as a betrayal against the group. It didn't take much for them to turn on Nick and Bella and now, the showmance is their prime target. If Christie’s refusal to use her Whacktivity Power didn't make her an immediate target for when Michie or Jack is the next Head of Household, then it could have still planted the idea in their heads that she isn't completely in it for the success of the Six Shooters.

At the end of Wednesday’s episode, Michie was upset after Christie didn't use her power as planned. In the end, things still worked out in the Six Shooters’ favor, but I don’t think this misstep will be forgotten. I can't really blame Christie for looking out for her own game, though. She went to Cliff and bargained with him to put Bella up in Michie’s place if she promised to never nominated Cliff for eviction moving forward. That way, she got to keep her power and save it for when she might really need to use it.

Michie might not see it that way, however. We already saw the majority alliance break apart when Gr8ful evolved into the Six Shooters, and sooner or later, the Six Shooters will run out of targets outside of their alliance. When that happens, Michie and Jack could lead the charge against Christie. I respect her move because it was for the benefit of her own game, but it might have been her downfall.