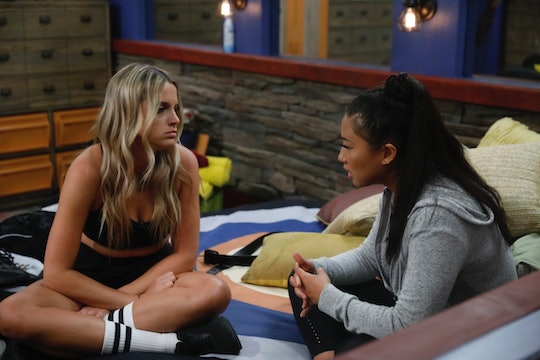 Christie's Diamond Power Of Veto Could Save Michie On 'Big Brother'

Ovi never got to put his Whacktivity power into play before be was eliminated on Big Brother this season, but Christie might get the chance to use hers. In the final Whacktivity competition, she won the Panic Power, which is the Diamond Power of Veto. Now, she has the chance to take a little of Cliff’s power as the Head of Household and put it into play, but will Christie use her Diamond Power of Veto on Big Brother? It could be Michie’s only chance at staying in the house and it would mean the Six Shooters regain control of the game. It would also mean Cliff’s HOH didn't go exactly as he had planned, since his initial targets were Michie and Jack, but at it stands, the original Unde9able is cracking, so that’s something.

Michie explained to Cliff he wanted to be put up on the block for eviction as a pawn. He would then wait until Christie put her power into play to take him off the block, thereby giving one of them the ability to choose which player goes up in his place. Michie and Christie’s plan is to put up Nick in his place because Nick is their target. Cliff originally told Nick he is safe from eviction this week, but the way I see it, Cliff probably wants Michie on the block any way he can get him there.

Michie volunteering himself to be put on the block essentially gave Cliff an out and put less blood on his hands in doing something he had already planned to do anyway. Now, it is up to Christie to use her Diamond Power of Veto during the live eviction ceremony to take out one of the Six Shooters’ targets.

Although Christie technically has until the eviction ceremony to use the power, she told Michie she would "100 percent" use the power on him. She is still an integral part of what is left of the majority alliance in the house. As long as she is on board with Michie’s plan, then she will use her Diamond Power of Veto to save Michie, get Nick on the block, and vote him out of the house. It really is a bold move all around and it seems like, so far, it is working in Michie’s favor.

The one thing that could sway Christie’s decision is the fact that both Jack and Michie are on the block. She was all for using her power for Michie before she realized two of her alliance members would be in danger. And Cliff is banking on her keeping her power to herself instead of actually using it. When it comes down to it, however, the Six Shooters want Nick out and if Christie’s power could make it happen, I can see her using it.

Until recently, Nick and Bella were as much a part of the majority alliance as any of the other members. But slowly, they started to lose the trust of their friends and before they knew what was happening, the rest of the alliance had turned against him. They even arranged to go against Nick’s plan, as the then-HOH, to vote Nicole out of the house. It’s clear Nick and Bella can no longer sit at the cool kids’ table at lunch. Now, they are both targets and it looks like Nick is the first half of the showmance the Six Shooters plan to take out.

Unless Christie wants to end up like Nick and Bella and become an outcast to her alliance, which is losing its members by the week, it would be in her best interest to use her power to save Michie and remain loyal to the Six Shooters.