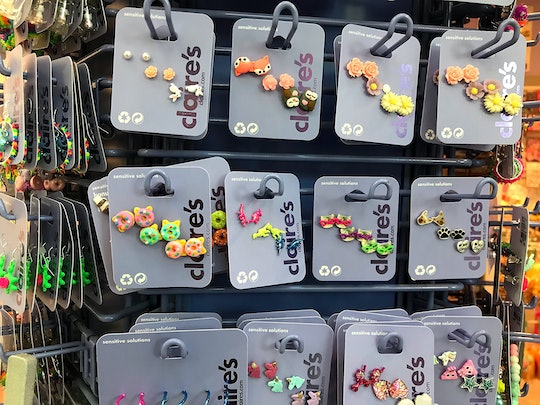 When I was a little girl I didn't really want my ears pierced until I was around 12 and even then I just did it for the shiny jewelry. My mother was one of those moms who figured I would let her know if I wanted it done and that was that. Simple. But the reality is, it's not as simple for everyone and I suppose the real question at hand is this: what is a professional meant to do if she's asked to pierce the ear of an unwilling participant? It's just such a question that has accessory chain store Claire's ear piercing policy in the hot seat after an ex-employee shared an open letter on Facebook.

Raylene Marks of Edmonton, Canada was a recent employee of Claire's, and while there, her duties included piercing ears for kids. She noted in her now-viral open letter to Claire's that she is well aware of the fact that working with children, especially when you're going to be inflicting a bit of pain, isn't always easy. Still, Marks added, "I didn’t mind piercing the ears of children who were excited to get new earrings, but nervous about the procedure. I’d do what I could to put them at ease." This was apparently not the case on the day Marks wrote about in her letter. (Romper has reached out to Claire's for comment and is awaiting a reply.)

As Marks explained in her message, a young girl came in with her mother to get her ears pierced. She and a fellow employee were doing a "double" piercing, which means doing both ears at once since the child was reportedly anxious. But what Marks found wasn't a child who was simply nervous; she found a child who did not want to be touched, as she wrote on Facebook:

She expressed that she didn't want us touching her, that we were standing too close, that she was feeling uncomfortable. She made it clear she no longer wanted to get her ears pierced. She begged, over and over again, for Mom to please, just take her home. That child's message was loud and clear to me: Do not touch my body, do not pierce my ears, I do not want to be here.

In an effort to respect this young girl's right to consent, Marks refused to pierce her ear and her mother eventually brought her home. But the next day she was told by a manager that she was in the wrong:

So I brought up the worst scenario I could think of. I wanted to know how far we were supposed to take this policy of piercing non-consenting children. "So if a mother is physically restraining her daughter, holding her down and saying, 'DO IT,' while that little girl cries and asks me not to, do I do the piercing?" My manager did not hesitate to respond, "Yes, you do the piercing."

Marks decided to quit on principle, but not before taking her story public.

The issue appears to be that Claire's did not explicitly state in their policy that an employee can refuse a piercing if they don't believe a child is consenting to the service, as Marks pointed out:

It says nothing about the consent of a child. And this obviously needs to change. Fortunately, Claire's agrees. Marks shared an update with concerned followers that the company contacted her and explained their plans to update their ear piercing policy.