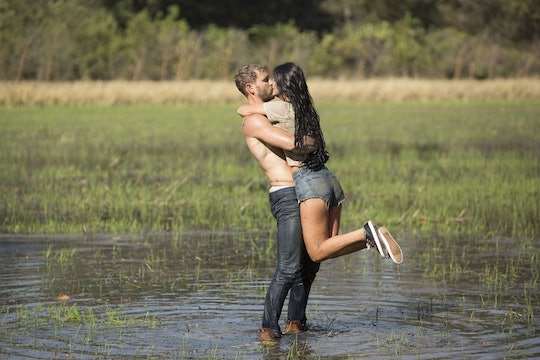 Raven Has A Good Chance of Winning 'The Bachelor'

It's down to the final four on The Bachelor and although there is apparently still some drama for Nick before he chooses someone at the end of all of this, it's definitely getting down to the wire. At the end of Episode 7, there were four women remaining — Raven, Rachel, Vanessa, and Corinne — and one of them could very well be Nick's wife when it's all said and done. Which is why the clues Raven wins The Bachelor are important now more than ever. In a few short episodes, Nick will make a marriage proposal that is hopefully met with a "yes" this time (seriously, can this guy catch a damn break?), so fans supporting Raven on The Bachelor can probably relax a little as the contestants are narrowed down even further.

The Arkansas business owner applied to be on The Bachelor shortly after a big breakup and, although her heart wasn't still full of sadness and revenge, it was important for her to tell Nick her story when they had a one-on-one in his hometown. And from there, she seemed to fall deeper in love with the Bachelor. He hasn't said the L-word to any of the women yet, but it's clear that Raven has felt that way for some time now.

Even though hometown dates have yet to air, there are already clues that Raven wins The Bachelor to give you hope in their future.

In Episode 4, Nick and the remaining contestants traveled to his hometown in Wisconsin where Raven not only got a one-on-one date with him, but she also got to meet his family. Using part of a date to attend a kids' soccer game isn't exactly romantic, but the fact that Raven got to meet Nick's mom, dad, and sister already is a huge sign that she might win this thing in the end.

After the most recent episode aired, Raven posted this image on Instagram with the caption of, "Headed to Hoxie," referring to her hometown, and before that, she'd been consistently posting about her dates on The Bachelor. It could just be to promote the show like any good former contestant would do, but it also seems like, in real time, she's still totally into Nick. So could that be because they're actually together?

Long before they started filming for Season 21 of The Bachelor, Raven visited L.A. on her own time and said on Instagram that it felt like home. So, if she were to, say, move there to be with a certain Bachelor, then it wouldn't be too hard for her to feel like she was right at home with him.

There Has Been Zero Drama Between Nick And Raven

If you look at the remaining four women on The Bachelor, almost all of them have had some kind of issue with Nick so far. Rachel and Nick have been kind of perfect, but since she was named the next Bachelorette, I think we can officially count her out. But Vanessa has had a few issues with Nick regarding the L-word along with Corinne's antics bothering the other women.

With literally just a few episodes left, we won't have to wait too much longer to see who Nick chooses, but there is definitely a chance that Raven wins The Bachelor this season.