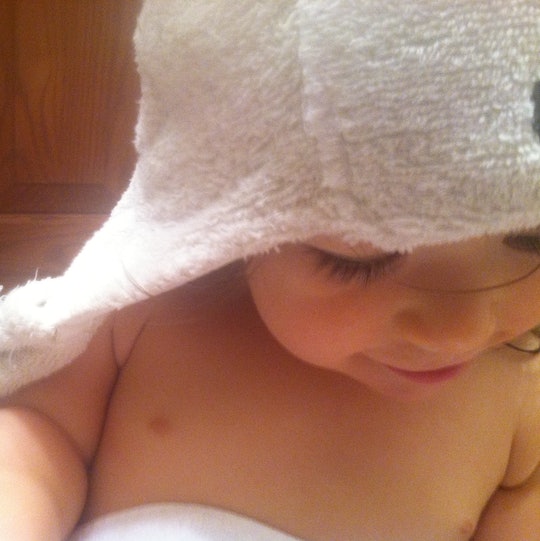 Regular co-bathing with Esmé wasn’t exactly choice I made, it was just part of a natural progression. In our first home, we bathed Esmé in a blue plastic baby bathtub placed in the bottom our tiled shower, using the shower head to wash her down. By the time we moved into our second home, I was excited to have a proper bathtub. Esmé has significant physical disabilities and although she was quite small at 17 months, she’d finally started to outgrow her blue plastic baby bathtub. And although she’d outgrown the tub, she wasn’t yet able to sit up in the full-sized tub without support. So, in a pinch, I just started climbing in the tub with her for her baths.

Now, four years later, we still co-bathe because Esmé remains unable to bathe alone, but also because we both love it.

The first few times I stepped into the tub holding my daughter’s wiggly naked body, I felt pretty anxious. I was worried about slipping, about the water temperature, about being comfortable in the tub together. Based on her history of aspirating liquids into her lungs and her status as a tube-fed child who took nothing by mouth, I was terrified that she’d get water in her mouth and choke. I was so focused on my daughter’s body during those first baths that I didn’t think much about my own body except insofar as I tried to organize it to keep Esmé comfortable.

As I took stock of Esmé’s changing body, the muscles slowly appearing in her slender, flexible legs, the tiniest increments of growth, I also took stock of my own.

In time our bathing ritual became something both Esmé and I looked forward to. She would splash her little feet in the water and giggle. Sometimes, in the midst of her worst days, when neurological disturbances or sickness made sleep escape her, we’d climb into a warm bath and she’d curl up on my chest, finally able to rest. Other times, when she was feeling better, she’d lie facing me and bring her face close to mine and babble, excitedly, in ways I’d not heard before.

During those times I felt like Esmé and I were able to begin to recapture a lot of the simplest of early bonding time that we had lost to extended hospital stays, stressful failed attempts at breastfeeding, and the fear of that first year with my fragile enigma of a child.

As I relaxed and felt increasingly present within the ritual of bathing with my daughter, I also gradually became aware of my body. As a result of medical challenges Esmé faced, I’d become accustomed to paying careful attention to her body and its needs, but the simplest needs of my own body went unfilled and, for the most part, unnoticed. Bathing with my daughter was one of the first times I began to notice the changes my body had undergone since she was born. As I took stock of Esmé’s changing body, the muscles slowly appearing in her slender, flexible legs, the tiniest increments of growth, I also took stock of my own: more generously proportioned than ever, soft in a way that seemed to announce the word “mother” to the world, but also strong in the way that comes from nurturing young life — not only the act of pregnancy, but from the hard work of holding, carrying, lifting, comforting, and playing. My body, plump and scarred as it was, told stories of the previous years: a marathon of growing life, of sleepless nights of seizure watch, of endless hospital stays, of adrenaline rushes, and of the trauma of life-and-death decisions.

I watched with awe as her body moved in the water, as I watched my own body compensated for her movements in order to keep her safe, comfortable, and happy. I felt such a deep admiration of the abilities of the human body, of her body — which fought so hard for the tiniest of gains — but also for my own body, which had, in its own way, fought so hard as well.

As I wrapped my body around my daughter in the bathtub I felt that strength. I felt stronger as a mother than ever with her tiny vulnerable body pressed up against me. There were times that feeling was so powerful I'd find tears forming in my eyes from joy, from loss, from love, but mostly from my awareness of the deep responsibility of it all. So, I would press my lips to Esmé’s head and tell her how much I loved her, how proud I was to be her mother.

I am not going to say that bathing with my daughter was the way that I came to terms with the changes in my body. Because that just isn’t true. I’m just not one of those women who love their postpartum bodies, although I’m thrilled for those who do. Learning to begin loving my body after baby has been a longer journey for me. But bathing with my daughter was part of how I started to feel present in my postpartum body, how I started to feel another layer of physical connection to my daughter that was just about being there together.

Although she and I spent more time in physical contact than what is typical because of her health challenges — she was rarely out of my arms before she was 18 months old, and by the time she was 3 Esmé still slept on me on average between three-and-six hours a day — I’d had little chance or reason for skin-to-skin contact. So much of our first years of contact was about keeping Esmé physically safe. However, bathing with Esmé, I felt I could relax and admire her. I watched with awe as her body moved in the water, as I watched my own body compensated for her movements in order to keep her safe, comfortable, and happy. I felt such a deep admiration of the abilities of the human body, of her body — which fought so hard for the tiniest of gains — but also for my own body, which had, in its own way, fought so hard as well.

In the bath with my daughter I realized how much I loved and respected her fragile body. I also felt how much she loved and felt safely supported by my body. Somehow, this realization allowed me to feel self-aware, but unselfconscious, in a way that I think I’d rarely felt before while naked — completely unconcerned about what had been properly waxed or how my thighs looked or whether my belly had a roll or not. I just felt in my body, in the moment, with the person I loved most in the world.

That gift of being so present in my body? It allowed me these moments to let go of the seriousness, intensity, and fear that had characterized much of my motherhood so far. Not that I wasn’t ready still to respond to whatever need might arise, but in that bathtub I felt free to be more of the mother I’d imagined myself to be: present, unselfconscious, silly, fun. We’d pull the curtain around the tub, and I’d say, “Let’s hide, Ezzy, and whatever you do, don’t splash the water.” And she’d kick and kick, laughing her nasally snort-giggle, water splashing everywhere, while I said, “Oh no, there’s water everywhere!” I’d sing, not the sweet quiet lullabies from bedtime, but loudly, making up lyrics about her bath toys. I’d repeat the sounds she produced back to her, and then other different sounds while she jammed her fingers in my mouth, trying to understand how I did it. I’d point to the parts of our bodies and name them.

As she’s gotten older, I enjoy this time more than ever. My daughter is 5-and-half years old now, and while she still doesn’t walk or talk, she wants so much independence. She crawls away from me in the house and outside with increasing determination. She pushes me away from her when I try to join in on watching her shows on her iPad. But she still nods to confirm that she wants to bathe with me. When we are in the tub she moves more and more independently, sitting up with less support in one end of the tub, but she still clings to me when she loses her balance or puts her head too close to the water. She still snuggles against my chest when she feels tired. She still chatters incomprehensibly at the end of her bath, often excited, happy, but sometimes, annoyed, wishing we could stay longer.

Being with her in the bathtub has continued to teach me things about her body and about my own. In a lot of ways her body is much the same as it was when we started bathing together a little more than four years ago. She’s grown a little and developed strength and coordination that is huge for Esmé, but that would be the work of a handful of months in the timeline of “typical” development. My body too has changed, becoming more like it was before Esmé entered my life. Not the same certainly, but its proportions are recognizable to me when I look in the mirror, when I try on clothing. Interestingly, I’ve not noticed these changes in my body when I bathe with my daughter. With her in the warm water I feel the same as I always have: strong, soft, silly.

I’ve started to wonder about how much longer we will have this time together. She remains very small, but eventually we will need a bigger tub, I suppose. At some point I hope she will be able to bathe completely independently, and, either way, at some point it won’t be appropriate for me to bathe with her anymore. She will tell me when, in her way, just as she tells me now not to be too close when she watches her shows. But, for now, that hasn’t happened. And I am thankful for more time spent, the both of us together, silly and present in our bodies, loving each other, and loving our selves.