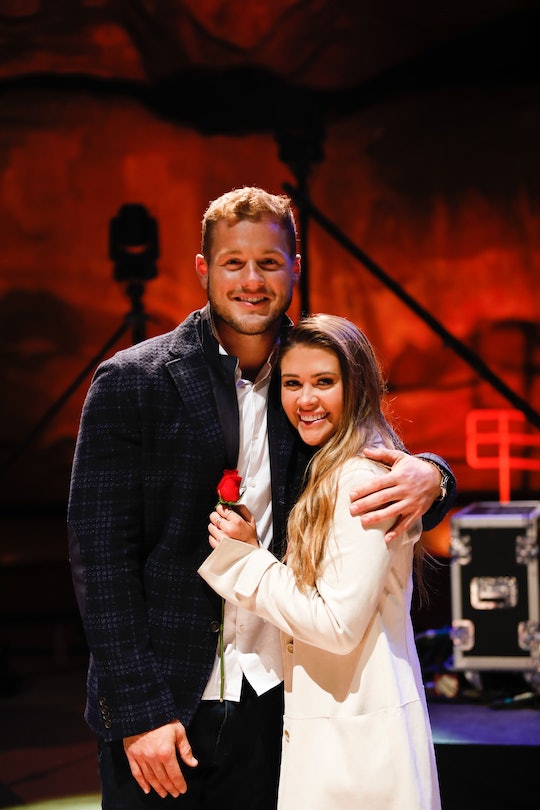 Caelynn might have been the Miss USA 2018 runner-up, but she ended her Bachelor run in fourth place this season. To her credit, she made it to hometown dates, which is always a big hurdle on its own, but once Colton was faced with the decision to take his relationship with her further, he realized she wasn't the woman for him. Although it was probably hard for some fans to handle, Colton sent Caelynn home on The Bachelor and now he's that much closer to his future wife.

Until tonight's episode, Caelynn honestly seemed like she would make it to the final two. She was so open with Colton about her sexual assault and about herself and it seemed like every time they talked, they got closer. I definitely didn't expect Colton to send her packing after hometown dates, given how far they had come. She even told him she was love with him after he met her family and spoke with her step-dad. If anything, I thought Hannah G.'s slightly skeptical family would turn Colton off more than anyone else's family.

In the end, though, Colton had to follow his heart and his gut and it wouldn't have been fair to himself or Caelynn if he kept her around and he wasn't 100 percent into it.

Now, Colton is even closer to finding the woman who could be his future wife after The Bachelor. He might have gone on Caelynn's hometown date expecting to fall for her as she fell for him, but it just wasn't there. This isn't necessarily the last we've seen of Caelynn, however, She could go on to be the Bachelorette if she plays her cards right and if The Bachelor producers pick her for the coveted post-Bachelor role.

She was definitely given what you might call a classic Bachelorette edit this season. She slowly but easily fell in love with Colton, opened up to him about her sexual assault in an important conversation, and she handled her drama with Hannah B. in the most mature way possible. I.e, not engaging in prolonged fighting matches at the Bachelor Mansion.

If Caelynn is chosen as the next Bachelorette after all of this, I wouldn't be surprised.It wasn't always easy for Caelynn this season, but even with her initial drama with Hannah B. and later with Cassie, she scored herself a solid one-on-one date with Colton. After that, she started to seem like more of a frontrunner than ever.

That's partly why her elimination on The Bachelor tonight was such a blow. Most viewers expected her to stick around for a while and at least make it to the finale.Although Colton connected with Caelynn's family during her hometown and got her step-dad's approval, he told her that he wasn't quite there. You have to admire his honesty where it counted the most and while it was heartbreaking to see her sent home this late in the season, it was probably best for them both.

Colton didn't really explain why he chose to send Caelynn home above the other women, but she took it as well as could be expected despite being blindsided. Unfortunately, this means that she won't make it to fantasy suite dates, but she will likely be on the "Women Tell All" special next. If she isn't picked as the next Bachelorette, she might appear on Bachelor in Paradise too. After all she has been through both on and off The Bachelor, I think Caelynn is more than deserving of love. It just wasn't with Colton and it was better that he ended things than string her along without having his heart all the way in it.