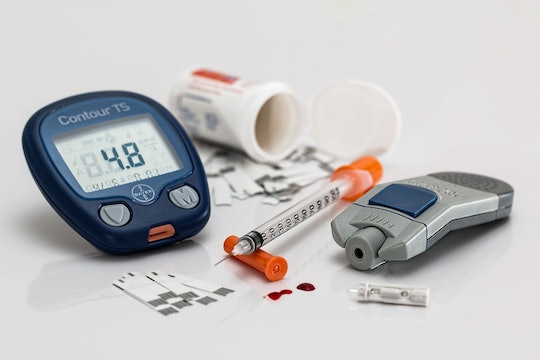 On Tuesday, Craig Boncler, a father of three boys, made a plea on Facebook for people to visit his restaurant in Houston, Texas. The business is struggling, he wrote, affecting his ability to pay for his mortgage and his sons' diabetes medications. A local news station picked up the story, publishing a piece on Boncler's ordeal Thursday morning. In less than a day, Boncler's community helped the single dad pay for his son's insulin. But it highlights a major problem: Parents shouldn't have to crowd-source to pay for health care.

According to Houston's KHOU, residents living in and around Houston rushed to Boncler's Sicily Pizza and Pasta after the initial story published to help boost sales at the struggling business. Boncler wrote in his original Facebook post Tuesday that "various reasons — some within my control, some not" had put his pizza shop "in a downward spiral." The loss of revenue has made it impossible for him to afford his car loan, mortgage, and the copays for his sons' insulin shots (all three boys have Type 1 diabetes).

Moved by his plea for help, community members showed up to Sicily Pizza and Pasta in droves, according to KHOU. Friends also set up a donation page for Boncler on YouCaring; so far, more than $16,000 has been raised.

Boncler wrote in his Facebook post that, at the time, he was down to two-weeks' worth of insulin. According to KHOU, Boncler's sons need daily shots, but a month's supply costs the dad more than $200 in copays. He told the station,

It's just been really tough. When my youngest was diagnosed a couple weeks ago, I didn't know how I was going to manage.

The business of insulin is a complicated mess. According to an NPR article published in 2015, the price of insulin has skyrocketed over the last few decades. But the reason isn't singular. The climbing costs could be attributed, in part, to older, less profitable versions of insulin vanishing from the U.S. market, NPR reported. There's also the lack of federal regulation that requires pharmaceutical companies to keep drug prices low. Insulin patents have also kept competition at bay, according to NPR, but since those patents have expired, experts believe insulin prices will drop in the future.

But whatever the reason, one consequence is clear: Millions of people living with diabetes in the United States are going untreated because they can't afford the high price of insulin. And if the American Health Care Act — aka Trumpcare — becomes law that will mean even more people living with the disease will lose access to life-saving drugs.

Trumpcare's MacArthur-Meadows Amendment will allow states to opt-out of key provisions in the Affordable Care Act (ACA). One of those provisions requires insurance carriers to cover essential health benefits, which includes the cost of certain prescriptions. The ACA provisions also meant that companies could no longer deny coverage to people who have diabetes, which is considering a pre-existing condition. But if you live in a state that's likely to request a waiver, such as Texas, not only will you most likely see your co-pays rise dramatically, you could lose your health insurance all together.

Boncler wrote in his Facebook post that he wasn't "asking for handouts." He just wanted people to patron his business so that he can earn enough money to afford his sons' medicine. But that request in and of itself is an issue. Why? Because parents shouldn't be forced to crowd-source in order to cover the costs of treatment. Health care should be affordable enough so that when you're in dire straits, you won't have to worry about how you'll pay for your medications.

The Affordable Care Act wasn't a foolproof solution to America's broken health care system. But it did help millions of people living with pre-existing conditions, such as diabetes, gain access to insurance — and thus, treatment. Trumpcare threatens to take that away. And that may mean more parents begging for help so their kids can survive.