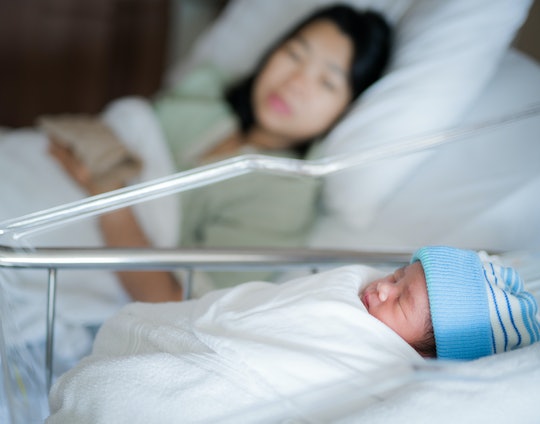 Confession: I Didn't Love Holding My Baby At First — & I Know I’m Not Alone

After waiting 40 weeks (more or less) to hold your child, you'd think that initial meeting would be magic. You plan for it, prepare for it, and dream about what it'll feel like to finally hold the person responsible for treating your insides like a playground. I mean, I know I did. I couldn't wait to hold my daughter in my arms. I loved her so much already, so I just knew our connection would be instantaneous. But when the nurses laid her in my arms, I realized I didn't love holding my baby. Not at first, anyway.

According to the Telegraph, one in five new moms say they don't feel an instant bond with their newborn, especially in the first few days postpartum. But make no mistake, feeling "disconnected" from your newborn immediately after they're born doesn't mean your future relationship with your child is doomed. If anything, missing out on the first feelings of intense love can actually make your future bond stronger. At least, that's what happened for me and my daughter. Even though I was terrified that our relationship was set up to fail, and that I'd never feel that immense love between a mother and her child, I soon realized that not "falling in love at first sight" didn't mean that love was completely absent. It's just that, sometimes, it takes a while to know the person you've been growing inside your body.

When the nurse laid my newborn daughter on my chest moments after she entered the world, I couldn't keep myself from looking at her in complete confusion. She didn't look the way I imagined she would. In fact, she didn't feel like my child at all. I kept searching her face for some kind of understanding. For acceptance. For something, anything, that would've made me feel like she belonged to me. I needed a moment to process the fact that I was now, officially, a mother, and the tiny human being I was holding was my child. I needed a second to sink into the undeniable reality that this little baby was now, and forever, my responsibility.

I thought I'd see my beautiful girl and become immediately enamored with her, as if my whole life led up to that one moment in time. When it didn't go that way, I felt such shame.

The experience of carrying a baby is strange. You know there's a person forming inside you, because you can feel them inside you. You know, and hope, that you'll eventually get to meet them. You know, rationally, that when you meet them they will be your child and you will be their mother. But when that moment finally comes, rationality falls by the wayside. Trying to wrap your mind around the weight of parenthood becomes much harder than you anticipated, and you're left feeling confused, disconnected, and scared.

I thought I'd see my beautiful girl and become immediately enamored with her, as if my whole life led up to that one moment in time. When it didn't go that way, I felt such shame. But, honestly, I'm not alone. A Time Magazine survey of 913 mothers revealed that "half of all new mothers had experienced regret, shame, guilt or anger, mostly due to unexpected complications and lack of support" related to their pregnancies, labors, and postpartum experiences. Whether it's the method of delivery, the unexpected use of an epidural, or the expectations in regards to bottle or breast, it's obvious that moms are under way too much pressure to live up to a standard that is, often times, unattainable.

Along with feeling some unsettling indifference towards my newborn, I also experienced the same fears most new moms probably experience. I didn't know how to hold my daughter, so I was afraid I was going to drop her or I would end up positioning her in a way that would hurt her neck. She felt fragile and breakable and, well, small. Those fears only exacerbated the disconnection I was feeling. The weight of my responsibilities far outweighed her, and I wasn't prepared for that juxtaposition. So, I assumed something was wrong with me. I started to second-guess my decision to be a mother, wondering if I was cut out for the job at all. I wish I would have known that so many other moms feel the same way. I wish I would have known that it's not atypical to feel overwhelmed and disconnected after you give birth. I wish I would have known that, sometimes, not falling in love with your baby right away doesn't mean you're a bad mom.

If you don't love holding your baby at first, it doesn't mean anything is wrong with you. It doesn't mean you're bound to experience postpartum depression, or that you're never going to bond with your baby. My daughters 11-years-old now, and while I didn't love holding her right away, I can tell you that I love being her mother.

We might not have had the start I envisioned, but there's nothing like the love I have for my daughter. A love that will certainly last forever.

More Like This
Paris Hilton Is Officially A First-Time Mom
When Does A Baby Recognize Their Father? A Pediatrician Explains
Celebrate Your Baby’s 1st Valentine’s Day With These Instagram Captions
Diastasis Recti Exercises You Can Do At Home To Heal Your Abdomen
What Parents Are Talking About — Delivered Straight To Your Inbox