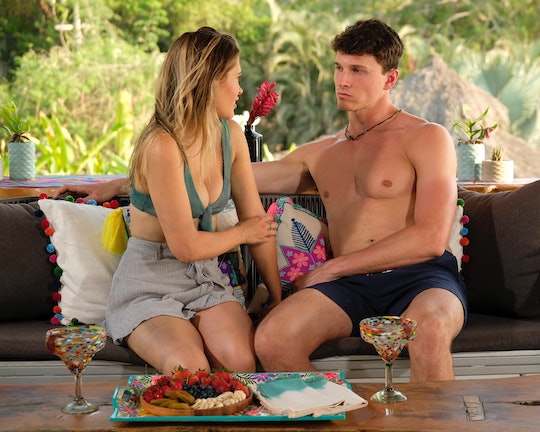 Connor just can't win this season on Bachelor in Paradise. Not only because he had his heart broken by Caelynn after she left the show to be with Dean (of all people), but also because fans can't get over his surfer dude voice at a time when they should be feeling sorry for him. Basically, Connor sounds like the Finding Nemo turtle on Bachelor in Paradise and once you listen to him again, you won't be able to *not* hear it.

Connor and John Paul Jones missed an opportunity to become best friends this season because they both sound like your typical California surfer, despite JPJ being the only one of the two who also looks the part. But that's where the similarities between Connor and your average surfer guy end. Instead of being a super laid back *bro* who exemplifies the super laid back turtle on Finding Nemo, Connor was all in with Caelynn and said he was ready to see where things could go with them outside in the real world.

Connor definitely isn't a slacker when it comes to matters of the heart. Unfortunately, Bachelor in Paradise fans can't stop comparing his voice to the turtle in Finding Nemo and it makes it a little harder to feel bad about him potentially leaving the season alone.

When Connor explained to the camera in Monday's episode that he went on the show open to finding love, it was hard not to close my eyes and hear his turtle counterpart. Still, just because Connor sounds like an animated surfer dude turtle, it doesn't mean his pain is any less real.

Because Caelynn realized her feelings for Dean are stronger for whatever she felt for Connor, she had to follow her heart and leave Bachelor in Paradise. She had every right to go with her gut feeling, but it meant Connor was a casualty in the Caelynn/Dean saga. And now, if things don't work out with Bachelor in Paradise latecomer Revian, Connor could go home solo.

Maybe comparing Connor to the Finding Nemo turtle is easier for fans than feeling bad for the guy. It's a lot easier to face Connor being the human caricature of a cartoon turtle than face the fact that he went on Paradise, fell for someone, and had his heart stomped on as soon as he put all of his eggs in one basket.

And once you hear it in his voice for the first time, it's something you won't be able to get out of your head. One fan on Twitter even said they noticed in his voice back when he competed for Hannah's love and roses on The Bachelorette last season.

Although Connor might be leaving Paradise the way he came (alone), he seems to have a sense of humor about the way fans see him. Earlier this season, he liked a tweet that compared him to Crush the turtle from Finding Nemo, so at least he embraces his surfer voice.

What's not clear, however, is how Connor even developed the surfer dude inflection in his voice. Instead of being from a typical surfer town somewhere in California, Connor is from Texas. Without a country twang and with his memorable voice, however, you probably wouldn't know it. And despite having a couple of romantic prospects this season, his voice is probably still what he will be known best for.

Connor might also leave Bachelor in Paradise known as the guy who lost his chance with Caelynn thanks to Dean's arrival, but if he has anything in common with the turtle from Finding Nemo other than his voice, then he can likely roll with the punches.