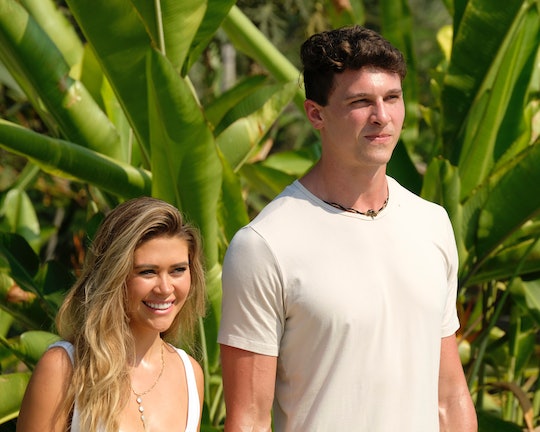 Connor Was Caelynn's 'Bachelor In Paradise' Rebound & Things Are Getting Messy

The majority of contestants who arrive on Bachelor in Paradise after week one and after other cast members have coupled up, get a bum deal. And although Connor arrived in time to pull Caelynn out of the funk Dean left her in following his departure, he might still see the consequences of being a late arrival. Now that Dean is back, Caelynn might have to break things off. And fans are probably wondering if this means Connor is single now after Bachelor in Paradise. I doubt there will be any other new arrivals and if Caelynn breaks up with him to once again pursue Dean, Connor will be on the next plane home.

If Connor and Caelynn left Paradise together, then I think they stand a chance in the real world. He was just what she needed when Dean decided he was too much of a lone wolf (insert brooding stare) to be tied down just yet. Then, they had an adorable date which left them both with feelings for each other. I know, things move seriously fast in Paradise. But just when things were getting serious, Dean made his Paradise return.

It doesn't mean Connor isn't dating anyone else outside of the show, but from the looks of social media, he is enjoying living that single life and supporting some of his Bachelor Nation besties.

To be fair, Connor isn't as active on social media as much as other contestants who post at least one photo or video every day. Connor’s Instagram is full of selfies, professional photos, and pictures with friends and family. His Twitter account isn’t much different and he seems to use it as a platform to give shoutouts to other Bachelor Nation stars. It doesn't look like he is seeing anyone else outside of the show right now, so there’s a chance Connor chose to take a breather after the whirlwind that is Bachelor in Paradise.

He might also still be a little hurt by the way things turn out on the show if Caelynn takes Dean up on his offer to leave Paradise and give their relationship a chance in the real world without the pressure of cameras or a proposal. Connor recently liked a tweet that compared Dean to an Oompa Loompa from Willy Wonka & the Chocolate Factory. He also liked a tweet Mike posted, which quoted Haley from Bachelor in Paradise, and said, "I am not plan B b*itch."

Connor might have liked the tweet because, like Mike, he dated Caelynn this season and they both know what it’s like to have dated the same person on Paradise, who then moved on to someone else. Or Connor is ready to move on and he and Caelynn don't end up together this season. Either way, there doesn't seem to be any clues that Connor and Caelynn are still together, post-Paradise, or that he is dating anyone for that matter.

Although things might not end well for Connor on Bachelor in Paradise this season, he probably still wants the best for Caelynn, even if she plans to ride off into the sunset with a mustache-free Dean. Following his Bachelorette departure, Connor told Good Morning America he still wished the best for Hannah and he hoped she would find her husband by the end of the season.

Connor is basically the perfect ex to have, even if it doesn’t work in his favor to be the ideal ex-boyfriend. He might not have found love on Bachelor in Paradise and he’s likely single now, but there is always next season. If not, I’m sure it would be a lot easier and a lot less messy for him to find someone outside of Bachelor Nation. Until that happens, though, Connor is all about supporting his fellow former contestants in the franchise.

Bachelor in Paradise airs on Mondays and Tuesdays at 8 p.m. on ABC.