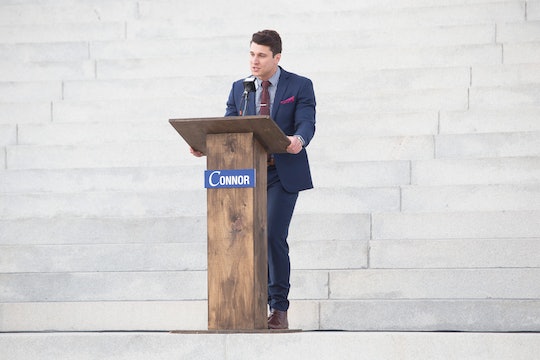 Connor Wearing His Glasses On 'The Bachelorette' Was Everything

I know that in the early 2000’s there were plenty of teenage romcoms about the girl taking off her glasses to somehow be a stunning beauty, but when Connor wore his glasses on The Bachelorette, Twitter was here for it and I seriously don't blame them. If he wasn't already an adorable and seemingly promising contestant for Becca Kufrin’s heart, then putting on those glasses did the trick. At least, where fans are concerned. For Becca herself, donning his glasses and looking like a real life Clark Kent wasn't enough to suddenly make a connection and keep him around.

Perhaps if he’d worn them more often than not, things would have been different, but to Becca’s credit, she had enough going on with the fighting contestants and constant tattling on each other that unfortunately, Connor was was of the guys who fell to the wayside. That certainly didn't stop fans from taking to Twitter to sing Connor praises for wearing his glasses and looking every bit as sweet as he had all season.

The light at the end of the tunnel is that he’s going to be one of the many contestants on Bachelor in Paradise Season 5, so never fear — the glasses could make a comeback.

Becca’s main reasoning for sending Connor home was probably the fact that she wasn't able to get enough time with him to get to know him and vice versa. He also threw that framed photo of Lincoln Adim’s earlier in the season, but now that we know Lincoln isn’t exactly an angel himself, I think we can all forgive him. But even if Connor’s inability to be more vocal about getting his time with Becca was part of what did him in, it was still hard to handle, especially after he introduced those damn glasses.

Honestly, if I had to pick a contestant to secretly be Superman but prefer him in his Clark Kent getup, it'd seriously be Connor. Clearly, I am not alone in this, as Twitter was all over Connor and his glasses on The Bachelorette. Come to think of it, not many contestants on either The Bachelor or Bachelorette wear glasses too often, so it could just be a thing discouraged by production.

Chances are, Connor is one of the many who prefer contacts to glasses, or chooses to wear contacts in case he’s going to face a physical competition for a group date rose or wants to ensure that his glasses don't get accidentally broken. I mean, guys are falling off bunk beds this season, so it could happen.

If Connor’s preferences is glasses over contact lenses, then viewers will likely be seeing less glasses on Bachelor in Paradise, but is it so much to ask that the producers tell him what the fans need? According to his Instagram, he does wear glasses from time to time, even if it's not as frequently as his contacts. OK, I’m not sure who told him that was a good idea, but Connor’s glasses are officially the unsung hero of the episode Monday night and he’d do well to keep them handy.

Obviously Connor wearing glasses wouldn’t have necessarily guaranteed him more roses or a place in the final four on The Bachelorette, but when he showed up in the morning with glasses on, Twitter went nuts and it definitely made fans wonder why he'd kept those put away all season. I don't know if we’ll get to see Connor’s now famous glasses on Bachelor in Paradise, but it truly couldn't hurt his chances at finding love.