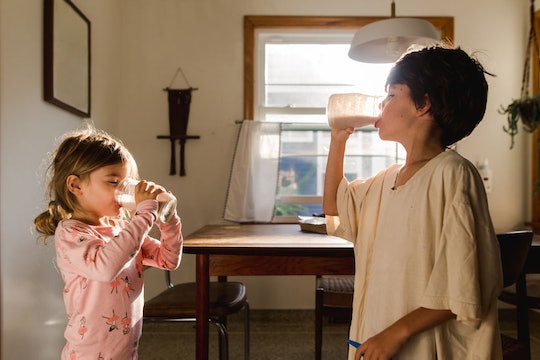 Of course parents want the best for their children, including feeding them the best, most nutritious foods at every meal. But life gets in the way, especially when it comes to preparing breakfast. Fortunately, there are plenty of convenient, healthy breakfasts for kids today, and not all of them are as unhealthy as their reputation suggests.

So many parents rely on toaster waffles, frozen pancakes or pancake mix, breakfast cereals, oatmeal, yogurt, or granola bars to get some breakfast into their kids on weekday mornings. Heck, trying to get them to eat at all is a success some mornings. But there’s no reason to feel bad about not preparing a big breakfast from scratch.

Ilyse Schapiro, MS, RDN, a registered dietitian in private practice in New York and Connecticut, tells Romper that while literal Froot Loops may not be her number 1 choice, she herself relies on some convenient staples for her kids.

“Frozen waffles — as long as it’s not the sugary chocolate chip ones — but regular, basic frozen waffles are fortified with a lot of vitamins. It’s not so bad, and for a mom of a picky eater, that’s better than eating a pastry,” Schapiro says. “Cereal with eight grams of sugar or less per serving, that’s not bad. Honey Nut Cheerios has 9 grams, but that’s better than Froot Loops.”

“If I make pancakes at home, at least I know my daughter’s getting an egg, milk and a whole grain mix. As long as it’s not soaked in a ton of syrup, you can make it healthy. It’s the same with French toast. If you make it at home with whole grain bread, egg, and milk, they’re getting all of those things, and it’s actually a pretty well-rounded breakfast,” she says.

Yogurts are an easy on-the-go option as well, and a great one. The only thing to be mindful of is sugar.

“I always encourage people to read labels, and I always go by the rule of eight grams of sugar or less per serving. You know they’re getting in calcium and vitamin D, some protein, things like that,” Schapiro says. “Now they make a bunch of yogurts lower in sugar that are sweetened with all-natural sweeteners. Especially with kids’ yogurt, the portion sizes are so small that it’s not always a big deal. For me, half the time I’m trying to convince kids to eat breakfast, so sometimes some yogurt with a little bit of sugar is better than nothing.”

Anita Mirchandani, RD, a dietitian who practices in New York City, tells Romper that parents shouldn’t feel that everything they buy is processed or bad. She suggests parents look at the ingredients on the foods they’re choosing for their children to help them find the best ones.

“Try to pick things with whole grains, so the first thing in the list should be whole grain or whole wheat flour, not enriched flour or water. Look for this in pancake or waffle mix — Kodiak Cakes are really good,” she says. “Kodiak has muffin or pancake cups, so you add hot water and mix it and it’s on-the-go. Those are great to have on-hand in the mornings when you’re pressed for time, and they’re giving you more protein than sugar.”

Checking ingredients is a technique that can apply to any prepackaged food to help busy moms and dads make healthier selections.

“Similarly, with granola, I would look at things that can offer your child a nutritional bang,” says Mirchandani. “Make sure there’s four grams of fiber per serving, and it has things like chia seeds for healthy hair, skin and nails, or nuts as a great healthy fat. If you’re looking at nut butters, go for authentic roasted nut butters, not the Jifs and the Skippys.”

For Mirchandani, the thing to prioritize is a well-rounded meal.

“A carbohydrate, a protein, a healthy fat, and fiber. If one thing is missing, pair it with something else.”

And, surprisingly, there is one seemingly healthy food Schapiro prefers her clients not give their children unless they’re made very thoughtfully.

“A lot of my clients give their kids smoothies, and I’m not a big proponent of that because it really can add up with sugars and calories,” she says. “It’s about making it the right way. They’ll do fruit, yogurt, milk and peanut butter, and it ends up at 600 or 700 calories. There’s no need for such a big smoothie in the morning.”

If your kid is stuck on smoothies, simply be mindful of the ingredients and portion size. And remember, breakfast doesn't always have to be a battle.