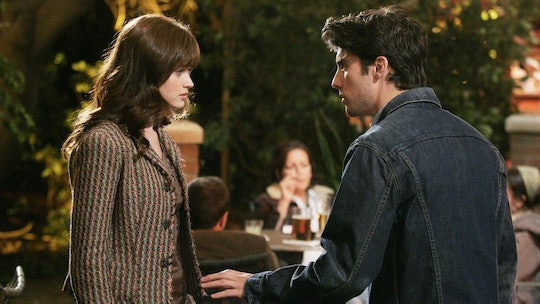 Could Jess & Rory Still End Up Together? 'Gilmore Girls' Fans Are Counting On The Revival

(Warning: This post contains spoilers from Episode 4 of the Gilmore Girls revival.) One of the most pressing matters of the Gilmore Girls revival was who Rory would end up with. Don't get me wrong — it's not like she had to end up with anyone at all, but with three of her ex-boyfriends appearing in the series, you kind of had to expect one of them to make a new connection with her. But after everything she goes through with Logan, could Jess and Rory still end up together? The Gilmore Girls revival makes it seem like anything can happen beyond the final four words of the series, but it still leaves so much unanswered that it's hard to say.

That being said, there has to be a reason for the way Jess looked into the window after hearing Rory laughing as he left her house, and there has to be more to their conversations over the book she was starting to write. They had always had a creative connection, so it would make sense for them to reconnect that way, but could it mean something romantic too?

There is also the matter of (gasp) that baby she's apparently brewing inside of her belly. Because I'm no mathematician, but there is only one guy who could be the father and it isn't Jess.

At least, as far as we know, it isn't Jess. He had spent some time with Rory while he was in town and if Gilmore Girls were to return again, could Jess and Rory end up together thanks to a few well-placed flashbacks of scenes viewers hadn't been aware of before? In some ways, it would be too perfect, but who else is Rory supposed to be with, if not Jess?

Dean is finally happy and settled, so thankfully she will probably never have to go down that road again and the whole random hookups and friendship thing with Logan was just too much. Jess has always been the guy for her who wasn't about games or cheating. I am a firm believer that Jess and Rory should be together, but could they still end up together?

If that baby is Logan's, then that leaves a whole other kind of mess to be cleaned up that probably wouldn't involve Jess at all. But int he event that she is somehow pregnant with Jess's baby, then it really is meant to be.