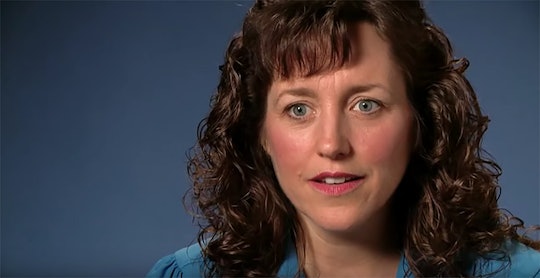 Did Michelle & Jim Bob Just Spill The Beans On Another Duggar Pregnancy?!

Josh and Anna Duggar revealed on April 26 that they're expecting their sixth child. Michelle and Jim Bob Duggar wrote a message congratulating the couple, noting that they now have 16 grandkids in total. Considering the actual number is 15 (including pregnancies), some fans are convinced another Duggar pregnancy announcement is imminent. Yep, there's a good chance Michelle and Jim Bob spilled the beans — or it was just an ill-placed typo. Either way... oops.

Anna recently took to Instagram to break the news that she and Josh will welcome a new baby into their lives come fall 2019. The two enlisted their five other kiddos (Michael, 7, Meredith, 3, Marcus, 5, Mason, 1, and Mackynzie, 9) to help out with the announcement, and Anna captioned the video with a sweet message.

"As we watch our children grow and thrive — we look forward to baby six joining us this fall!" she wrote in part.

Jim Bob and Michelle, who know their way around a baby announcement, chimed in on the development via their family blog.

"We are so happy for Josh & Anna, expecting their 6th child and our 16th grandchild!" the couple penned in a joint statement.

Cute the record scratch. Wait, did Jim Bob and Michelle just cop to having 16 grandkids? The last time I checked, the current number (again, pregnancies included) clocked in at 15. Hmm.

After this potential gaffe made the rounds, some Counting On fans took to Reddit to discuss what the number 16 could mean. Some people think Joy and Abbie Duggar are likely frontrunners, while other fans argued that Michelle can't keep her facts straight.

"I think it's a toss up between Joy and Abbie for the next pregnancy announcement," someone penned. "Also, Michelle probably barely knows her grandchildren's names, let alone how many there are." That seems a little harsh, no?

One fan agreed with part of that theory though: "My bet is Joy being pregnant."

Another commenter brought up Lauren's recent miscarriage and the possibility that she's currently pregnant again, stating: "It would have been Lauren, but she seemed to indicate she wasn’t recently on Instagram. However, I fully expect any of them to announce at any time, so..."

As for the most compelling theory? Someone might be pregnant with twins. Considering Michelle gave birth to two sets of multiples, this could be a possibility.

That all being said, I think it's important to take a pause here to note that it's never OK to speculate about another person's fertility, even if no malice or hurt is intended. Rumors can have consequences, as fans recently witnessed firsthand when Lauren had to debunk pregnancy gossip on Instagram.

Swinging back to the curious case of 16 grandkids, it's possible that Michelle and Jim Bob included Lauren's miscarriage in their count of 16. I bring up this scenario because the couple sometimes says they have 20 kids, in reference to their miscarriage in 2011.

"It’s hard to believe Jubilee would have been 6 years old today," Michelle and Jim Bob wrote about losing the pregnancy in the second trimester. "Jubilee is our 20th child who was stillborn. We so look forward to seeing Jubilee in heaven."

As anyone who has followed the Duggars throughout the years probably already knows, anything is possible with this family. The large brood is full of surprises, so I won't be shocked if another family member announces a pregnancy in the months to come. Stay tuned.