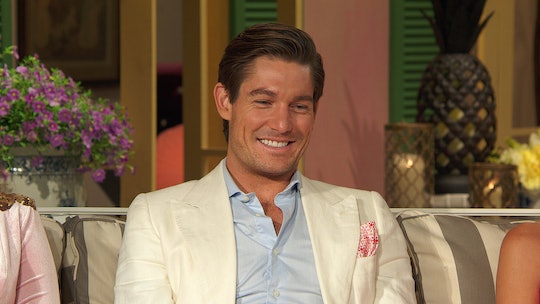 Craig has always loved sewing on Southern Charm. And even though Naomie didn't love that he was holed up inside all day with his sewing machine, he still stuck with what made him happy and continued to try and find the right career path to be able to use his skills. Now, Craig’s pillow business on Southern Charm has given him a way to do just that. He has been able to combine his love of the south and his passion for sewing into something that he can potentially make a solid living at and this is likely only the beginning.

His brand, aptly called Sewing Down South, currently has eight different pillowcases for sale. They are all beach themed in some way and some have crabs, lobsters, or coral printed on them to give them each a unique pop of color. On his pillow business website, Craig wrote that he picked all of the prints and designs himself and that he plans to continue to evolve the line even more. "I'm excited to focus on what brings me and so many others so much joy," he wrote on the website. "Us sewers deserve a kick-ass sewing brand that represents our lifestyle!"

Craig started off sewing little gifts for friends and family and using the scraps to make blankets for homeless shelters, but now his former hobby has evolved into something much bigger. He now has a designated sewing room in his house that makes it seem like he means serious business and he even partnered with fellow Southern Charm star Patricia Altschul on a pillowcase collaboration.

He worked with Patricia to create cat and dog themed pillowcases to go with her caftans and they are available for purchase on her Patricia's Couture website. The collaboration came as a surprise to some Southern Charm fans who watched Craig get the humiliation of a lifetime when he missed the deadline for Patricia’s custom pillowcase order last season and she cancelled the order. He did redeem himself by making her some flamingo pillowcases and after that, the two collaborated on a project of their own to really bury the hatchet.

Craig’s pillow business on Southern Charm seems to be booming, but he has also used his talents in other more important ways. He recently posted a photo of himself on Instagram at a sewing machine, making pillowcases for Case For Smiles, which is a charity that makes pillowcases for children’s hospitals across the country. He also regularly checks out new fabrics and seems to constantly have new ideas in the works for his pillowcase brand.

Last season, most of Craig's friends and co-stars saw his talent and love for sewing as more of a hobby, but slowly it became something much more for him. Even Naomie, who he dated for a while, saw it as more of a hobby than anything else. "Hobbies are important, and I thought it was great," she said on an episode of Watch What Happens Live. "The reason I had a problem with [sewing] was Craig is a procrastinator, and he was using sewing as a way to procrastinate doing things that he actually needed to do, you know, important things... Instead of doing something that he had a deadline on or whatever, he'd just sit and sew all night."

Whether or not sewing started out as a hobby for Craig, it quickly became his passion and designing pillowcases has allowed him to start to build a real brand for himself. And as he branches out to other things like clothing, Sewing Down South will likely continue to grow.