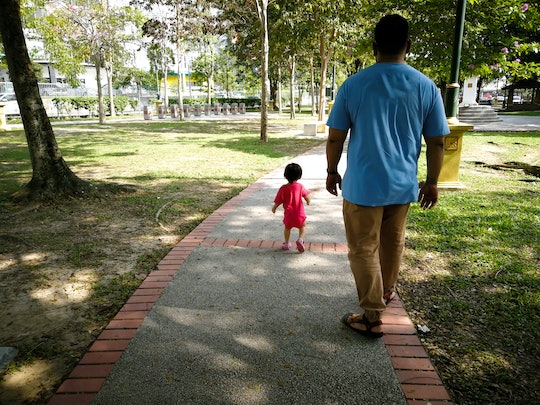 Honest Dad Admits To Smoking Weed, Parents (Mostly) Seem To Get It

It takes a bold, brave parent to admit that spending time with their little one is not always the most fascinating part of their day. That sometimes they might need a little extra something to get through what many of us recognize is the awful monotony of spending a day in service to a pint-sized tyrant. So when a dad on Humans of New York admitted he had smoked a little weed before spending the day with his small daughter, many parents on the internet appreciated his honesty. Because how many times can a person sing "Baby Shark" before they need something to help them stay calm, right?

Humans of New York recently shared a post from a father who was getting ready to spend an afternoon in service to his 19-month-old daughter. He doesn't call it service, of course, but any parent of a child that age knows that's generally what it turns out to be. As this particular dad explains it in the Facebook post, he had "just smoked a joint" and was already thinking about the food in his refrigerator at home, namely "the buffalo dip in my fridge. She’s going to want to eat it. I’ll have to keep it in the kitchen and run back and forth."

Already this sounds like one of the most honest posts I've read in ages about what the day to day of parenting looks like in real time.

The anonymous dad went on to outline his plans for his afternoon with his little girl:

We’re probably just going to build some sick block castles. Actually I’ll build them, and she’ll knock them over because she loves to watch me freak out. Then I’m praying she’ll take a nap so I can watch the football game. Honestly I don’t even care about the game. It’s just an excuse to eat my buffalo dip.

Many people took to the comment session to applaud his honesty, with one social media user noting, "Sounds to me like he’s mellowing out on his time and looking forward to spending time building castles with his toddler daughter. I know when my kids were that age I’d be praying for them to take naps too. Doesn’t make him a bad parent, toddlers are exhausting." Also a lot of people were curious about that buffalo dip since it sounds pretty delicious. Unfortunately, there were also many comments from people who were outraged at the idea of a parent who smokes weed. Never mind the fact that mom wine culture appears to be totally acceptable, as reported by USA Today, and cannabis is 114 times safer for you than alcohol, according to a study shared by the Washington Post.

The Humans of New York staff added a little extra insight into the situation, explaining that this dad is the primary caregiver and also reminding people that weed is becoming legalized in more states all the time.

This dad's relationship with his daughter sounds real to me. Relaxed and open. The kind of relationship where he spends time building "sick block castles" when she's awake. But yes, he still wants time to himself. Being a parent doesn't have to mean you lose yourself entirely to your kid.

It also doesn't mean you have to share your buffalo dip with them.