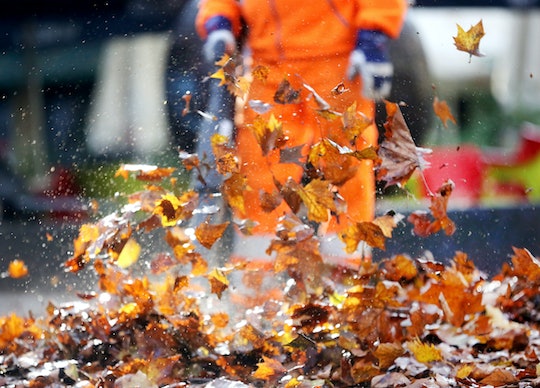 Although fall is still two months away and there's hardly a stray leaf to be found on the ground, dads in Portland, Oregon, have busted out their leaf blowers. But these dads aren't corralling lawn debris. Rather they've turned their leaf blowers against tear gas. This week, dads joined Portland's "Wall of Moms" in protecting protesters from federal officers' aggressive crowd-control tactics with their gardening tools in hand.

A flyer calling for dads to assemble that night in downtown Portland with face masks, leaf blowers, and orange clothing began circulating on social media July 20. "This is the *perfect* excuse to get some GEAR!!" a tweet from the PDX Dad Pod Twitter account noted. Dads were encouraged to support the city's ongoing protests against police brutality and systemic racism after federal officers repeatedly deployed tear gas against protesters, including a group of moms.

Nicknamed "Wall of Moms" due to their penchant for forming a human shield between protesters and federal officers, these moms have been supporting nightly protests in Portland since July 18. On Monday, dozens of orange-clad dads grabbed their favorite yard tool — you'll spot at least one leaf blower and one rake in the video below — and marched alongside Portland's "Wall of Moms."

It's important to note, however, that while the majority white moms and dads who've recently begun showing up to protests in Portland have quickly garnered headlines nationwide, they're not the first moms or dads to protest in support of Black Lives Matter or against police killings of unarmed Black people. In fact, as ABC News reported, Black parents have long been at the center of these protests.

And dads aren't the only ones to recognize a leaf blower's versatility. In fact, protesters in Portland have been using leaf blowers to blow away tear gas and other chemical agents long before the group of dads arrived on the scene. Video shot during a July 18 protest and shared on Twitter by preschool educator Lindsey Smith showed one protester using a battery-powered leaf blower to blow tear gas off other protesters' clothing. Smith also recorded protesters using leaf blowers to disperse tear gas thrown by federal officers outside Portland's Hatfield Federal Courthouse Tuesday night.

A spokesperson for the Department of Homeland Security (DHS) reportedly expressed "frustration and astonishment" to Washington Post reporter Nick Miroff about Portland protesters' use of leaf blowers. "One DHS official we spoke to expressed frustration and astonishment that Portland protesters were showing up with leaf blowers to disperse tear gas and send it right back at fed agents," Miroff reported Monday over Twitter.

Acting DHS Secretary Chad Wolf has repeatedly characterized protesters in Portland as "violent anarchists and extremists," while dismissing Oregon state leaders and Portland city officials' calls for DHS to remove federal officers from the city. "That's just not going to happen on my watch," Wolf said of officials' request DHS recall federal officers on Twitter. "It's time that we take a stand. It's time that local leaders here publicly condemn what the violent anarchists are doing and only then I think will local police and federal police get this under control."

As nightly protests against police violence and systemic racism have continued for more than 50 straight days in Portland, video has surfaced showing federal officers reportedly using unmarked rental vehicles to grab civilians off the street and regularly deploying tear gas, pepper spray, and "less lethal" munitions against protesters. Earlier this month, Oregon Public Broadcasting reported a 26-year-old protester had suffered facial and skull fractures after federal officers allegedly shot him in the head with impact munitions.

Despite protests in Portland having grown in size in recent days, President Donald Trump praised federal officers on Monday. "They really have done a fantastic job in a very short period of time," Trump said of DHS officers in Portland, as the BBC reported. "They grab a lot of people and jail the leaders." According to the news outlet, Trump also threatened to send federal officers to other Democratic-led cities, including New York City, Chicago, Philadelphia, Detroit, Baltimore, and Oakland.

In Portland, however, it seems as if a number of parents will continue to find ways to stand against federal officers, with or without their leaf blowers.