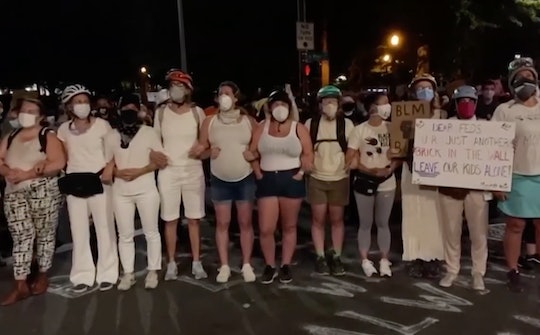 Reports that federal officers in Portland, Oregon, were detaining citizens without explanation and employing aggressive tactics against protesters has galvanized mothers of all ages to join the city's nightly protests against police brutality and systemic racism. Over the weekend, dozens of Portland moms formed a human shield to protect protesters from law enforcement officers. Videos shared across social media networks captured the group standing arm-in-arm, chanting, "Feds stay clear, moms are here!" before being teargassed by federal officers.

Nightly demonstrations sparked by the police killing of George Floyd have been ongoing in Portland since late May. Although largely peaceful, the demonstrations have frustrated President Donald Trump, who dispatched federal officers from the U.S. Marshals Special Operations Group and U.S. Customs and Border Protection to Portland in early July, according to a statement from the Department of Homeland Security.

But while Trump may have hoped to quell protests in Portland, reports that federal officers were allegedly using aggressive tactics against peaceful protesters and grabbing civilians off the street in unmarked cars, as Oregon Public Broadcasting reported, have served only to re-energize demonstrators and, most recently, mothers.

Dozens of moms outraged over law enforcements' aggressive response to peaceful protesters organized to form a "Wall of Moms" at protests in Portland over the weekend. On Saturday, a group of moms who identified themselves as Moms Against Police Brutality linked arms to form a human shield between protesters and police.

They chanted "This is what democracy looks like," "Feds go home, moms are here" and "Leave our kids alone" while standing between protesters and Portland's Hatfield Federal Courthouse. Video shared over Twitter by preschool educator Lindsey Smith showed federal officers fire flash bangs and tear gas at the line of moms as they stood chanting outside the courthouse.

But footage of federal officers firing tear gas at protesting moms on Saturday inspired even more mothers to show up to Sunday night's protest, this time wearing yellow.

"The wall of moms were in white yesterday, and they were tear gassed and shoved," one mother present at Sunday's protest told Willamette Weekly when asked what drew her to attend that evenings demonstration. "So we came in yellow today and we're alongside the fence telling them: 'Feds go home, the moms are here.'"

On Sunday, the moms, the majority of whom were white, once again linked arms to form a human shield around protesters and federal officers once again deployed tear gas against them, according to videos shared across social media.

"I am a 49 year old mother with a Masters in Education and I just got gassed by my own government," a woman who identified herself as a protesting mom in Portland wrote on Twitter in the pre-dawn hours Monday. "We were peaceful."

These are, of course, not the first mothers to have taken to the streets to protest police violence or to support Black Lives Matter protests. In fact, Black mothers have long been at the center of these protests. Still, Portland's protesting moms show mothers everywhere have had enough.