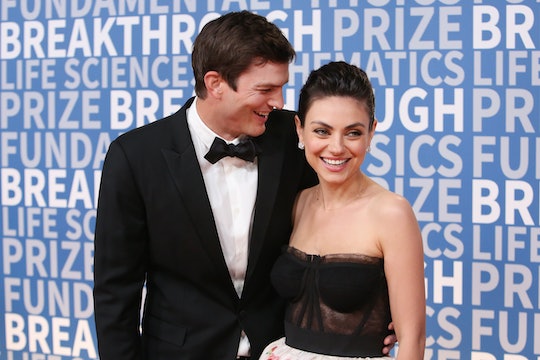 I don't buy into the mommy wars, but I will say that even among the moms I am closest to, something happens when you realize you are on opposite sides of the Great Sleep Training Wall. A stone shifts into place and you silently agree not to discuss the matter further. But the real issue, I thought while listening to Ashton Kutcher and Dax Shepard discuss sleep training on Shepard's podcast Armchair Expert recently, is that dads do not take enough of a role in sleep decisions. I actually think fathers are able to view the issue somewhat more clear-eyed — and seem less likely to feel their baby's cries as stabs to the heart. Kutcher and Shepard take an even harder line on the topic: that parents who don't sleep train are suckers.

Twenty-seven minutes into the Armchair Expert podcast, they are discussing the SNOO, the "robocrib" that Kutcher and his wife Mila Kunis were recently shamed for using, and talk turns to the baby manuals they like best. Shepard likes Harvey Karp's Happiest Baby On The Block. Kutcher chimes in to say that the book he loves is The Sleepeasy Solution — a sleep-training manual by "the experts who are helping Hollywood's A-list get their zzz's," according to the Amazon page. On the topic of sleep training, Shepard says, "Aha yes, we were militant that way as well."

Then comes the judgement of parents who don't sleep train:

Kutcher: I think some people just fail that on that one hard.

Shepard: And they're the only ones who pay the price, that's what's funny.

Kutcher: Once you nail [sleep training], everything else is manageable.

Dax: It's hard not to be judgmental when you're a parent and you have friends who have kids who are one-and-a-half and still don't sleep through the night, like, "Come on, man."

Pricks, right? But there is something there.

From my vantage point, the larger contingent of the population seems to be in favor of bed-sharing or prolonged co-sleeping, and against cry-it-out. But, among people who have read the science on why sleep is vital for infant development, I see happy families, happy kids who don't dread nightfall. I sleep-trained my daughter at six-months-old, and my son at 13-weeks-old, using Healthy Sleep Habits, Happy Child by Dr. Marc Weissbluth. We have never looked back.

She and her husband put sleep-training in the realm of dad-responsibilities.

However, the cries of my daughter on that first night felt as those they were shaving the myelin off my neurons. Advised a radiologist friend who put me onto the book, "Get out of the house. That's what I did." She and her husband put sleep-training in the realm of dad-responsibilities, and also made the salient point that one or two nights of crying would be dwarfed by the months and even years of crying that a child incapable of properly self-soothing experiences (for anyone who fears the flawed science claiming cry-it-out results in brain damage — this is not true, per Flinders University researchers).

But we don't like to give women hardline advice like "Make your husband sleep-train the kid." We all believe in "choice." The trouble is that most moms, given a choice, will always always choose lying themselves on the railroad tracks in sacrifice to their children over a pragmatic choice like "I'm going to let my baby cry for 45 minutes one night, 15 minutes the next, and then I'll sleep the peaceful sleep of Mila Kunis for the rest of my life."

I previously reported on a sleep clinic in Australia that offers every kind of support to parents struggling with infant sleep issues, including 24-hour support from a midwife, meals, accommodations, education, and community in an all-expenses paid package. Everything, that is, except permission to let their baby work through the frustrating cries that eventually lead to sleep.

Women are also likely to be experiencing "subjective blindness" during those early months when decisions around your "sleep philosophy" are being broached. It's most often women who are getting up to feed in the middle of the night, multiple times, as Kutcher acknowledges earlier in the podcast. Women who are more sleep-deprived. And the problem there is that that level of sleep deprivation, which can lead to decisions to bed-share, can be dangerous.

In 2015, a task force on SIDS concluded that sleep-in policies in hospitals had resulted in "several recent case reports and case series of severe and sudden unexpected postnatal collapse in the neonatal period among otherwise healthy newborns and near fatal or fatal events related to sleep, suffocation, and falls from adult hospital beds," per the report published in the American Academy of Pediatrics. That is, new moms are falling asleep from exhaustion, and babies are being dropped. Writing in USA Today, Harvey Karp warned that "The terrible, unintended consequence of the Back to Sleep campaign is that it has worsened infant sleep," and that "when babies don't sleep well, parents resort to bed-sharing, which leads to many more infant suffocation deaths." While SIDS has fallen since the 1990s, accidental suffocation and strangulation deaths have quadrupled, per the CDC.

And look, yes, there is an element of privilege in the decision to sleep-train (you need the space to do so), but not sleep training is also privileged for parents struggling to get by on no sleep because they work two jobs or can't afford help. But men often exist outside of this realm of hypercritical parental choice: they feel fine about sleep-training, and are oblivious to the shaming that comes with it.

So take it from the judgy doofus in the baseball hat: sleep-training is an acceptable, evidence-based decision that is good for your child, yourself, and your partner. If you managed to get your child to self-soothe without a cry (uh-huh), then you don't have to worry about this. But if you find your sleep in shards, then maybe it's worth revisiting if our know-nothing partners who see nothing wrong with sleep-training might like to take the reins on that one.

As a bonus, leave it to dad.