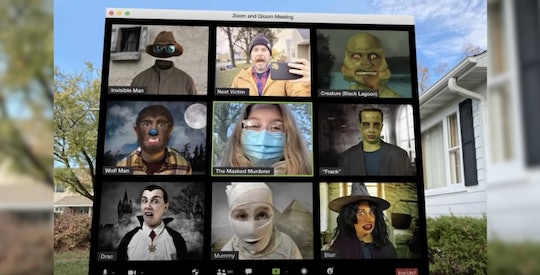 OK, This Dad's "Zoom Meeting" Halloween Costume For His Daughter Is The One To Top

Imagine what it would be like to have a virtual meeting with all the classics? You know, a witch, Frankenstein, Dracula, the Invisible Man who is wearing clothes so at least you can tell he's there? A werewolf, a mummy, the Creature from the Black Lagoon. Well, one Iowa dad's Zoom Halloween costume for his daughter makes it a reality, and it's so incredible you won't be able to figure out how he managed to pull it off.

Greg Dietzenbach wanted to do something special for his 12-year-old daughter Ada for Halloween and came up with the genius idea to create a "killer" Zoom meeting costume, featuring all of the classic Halloween monsters signing on for a virtual get together. Dietzenbach had his daughter dress up in costumes as each of the characters (Frankenstein, Dracula, a mummy, etc) and took photos of her in each to create that square, then left the middle square as a hold for her head where she would be wearing the costume in real time.

"Fortunately, I work for a company that builds corporate environments and museums so I had a large format printer at my disposal," he explained in an interview with Mashable. "I recreated the Zoom interface (adding subtle jokes like 666 Participants and instead of 'End Meeting for All' it says 'End Life') in Adobe Illustrator and transformed photos of my daughter into monsters using an iPad drawing app called Procreate."

The creative dad told the news outlet that it took about an hour and a half to create each monster, but it was the time he spent doing the monster face photo shoot for their "Zoom and Gloom meeting" with Ada that was the most fun.

One of the best parts of the costume? Above Ada's head there is a square that says "Next Victim," and it shows the person she is looking at. What a treat.

The results were certainly worth the effort. His video on social media of Ada wearing the costume has already been viewed thousands of times since Thursday, with people writing messages like, "That's wonderful! Brilliant job, but it would likely terrify me," and "This is fantastic! How does the screen work?"

Dietzenbach shared a video of how he put the entire thing together on YouTube for anyone who might want to recreate the look.

I don't want to play favorites here, but dads are certainly raising the bar this Halloween. From a social distancing zip line featuring candy and even beer for grown ups, to a candy chute designed to keep trick-or-treaters safe, it looks like there's nothing a dad won't do to make the spooky holiday fun for kids. Even creating a personal Zoom meeting with werewolves and vampires.