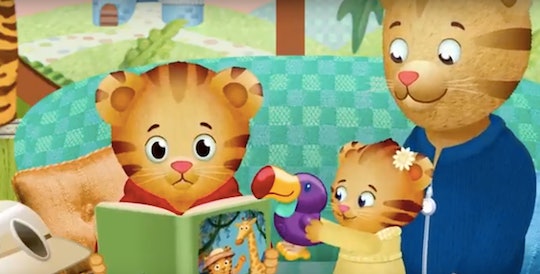 In America, we don’t often celebrate introverts, but watching Daniel Tiger’s Neighborhood — the charming reboot of Mr. Roger's Neighborhood — with my little boy the other day, I was delighted to see the value of solitude and inner space so beautifully and tactfully championed.

Not that I should've been surprised. Like Mister Rogers’ Neighborhood, the show on which it was modeled, Daniel Tiger regularly takes on timely issues of cultural significance, and is informed by a team of early learning specialists, according to PBS. A recent episode embraced the needs of working moms, while the series in general wonderfully illustrates the three-dimensional roles men and women play in family life, and how each gender can transcend the cultural straitjackets of the past.

On this particular morning in the episode "I Want To Be Alone!" Daniel was overstimulated and drained by the boisterous play of his normally tight group of friends. He just wasn't feeling like pretending to defend a castle with Prince Wednesday, Katerina, and O. It quickly dawned on him that he needed an exit strategy and needed it fast!

I was so pleased to see that instead of being mocked as oversensitive or admonished for not being a team player, Daniel's teacher instinctively validated and normalized his feelings. Shepherding him to a quiet part of the room where he could draw, she tells him it's OK to take a break, and that we all need our solitude, singing:

"Sometimes you want to be alone, you can find a place of your very own."

What a cultural sea change this represents: the way we have come to value not only the introverts in our midst but also to reappraise the value of cultivating inner space. We all need time and space to regroup, but paradoxically, we need to regroup with our own collection of selves before we can return to the group of others.

Not only does the teacher mediate Daniel's “crisis” so sensitively, the characters themselves also respect his request, and maintain the space for him to return without penalty.

A new mantra for children and adults alike, it's truly a breath of fresh air, for it moves beyond the extroverted pressure in our culture (even for extroverts!) to be perpetually "on" and connected — a pressure I see in my practice as a clinical psychologist.

This more compassionate and balanced view is highlighted at the peak of the show in a song:

"It's alright to take a break. To be alone, to step away. Find a quiet place to settle in and have some space."

It gets better! Not only does the teacher mediate Daniel's “crisis” so sensitively, the characters themselves also respect his request, and maintain the space for him to return without penalty. There is no shaming or conformity pressure to be a part of the group. Instead, flexibility, respect, and trust reign in this new kingdom. It becomes an article of faith that the person asking for a time-out has their good reasons, that it doesn't have to be taken personally. What a novel model of relating. Just think of how much space that truly opens up!

Each character rotates out of the group for their own time for solitary recharging, illustrating new possibilities for how that alone time can truly add to the individual and group. O the Owl leaves to read a book about castles and serendipitously discovers the solution to the kids' dilemma — they need a moat to protect themselves from the dragon. Daniel realizes that being on his own spurs all sorts of new ideas in the development of his adventure story.

Just as “Quiet Leadership” researcher Susan Cain, along with other researchers, has pointed out regarding group work, we are in fact more creative and effective when we tag out, work on our own, and then rejoin!

There's no shortage of situations in which internal space can be interrupted, and often, unknowingly so. Daniel's baby sister Margaret plays joyfully with her squeaky toys and interrupts Daniel's happy place reading his favorite book. Although his father helps him find a spot back in his room, he runs into his mother who is banging away fixing a broken drawer — as for all of us, it can be downright maddening finding and keeping that space!

Fortunately, there are infinite ways to reconnect to our internal worlds: reading, drawing, hanging out in your own castle, or being alone together with someone you cherish (like Daniel discovers with his mother).

As the song instructs:

"No matter where you are or where you go, you can find a place of your very own."

Teaching kids to give themselves space to feel and be alone is a concept I'm seeing spread through schools and homes. And it means that quieter kids will know they don't have to go any further than their own neighborhood to feel safe and understood. Right, friend?