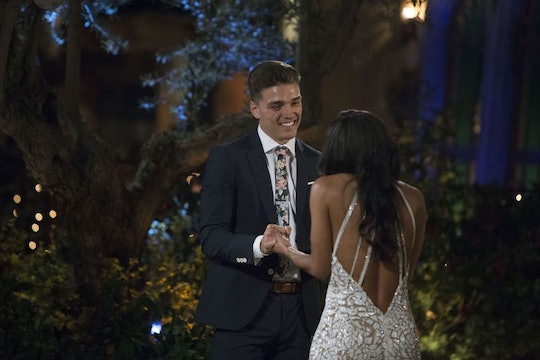 Dean's Instagram Proves This 'Bach' Suitor Has A Big Heart

He might have gotten off to a rocky start at the very beginning of the season, but Dean’s Instagram proves The Bachelorette contestant has a big heart when it comes down to it and could very well end up winning Rachel over. In fact, the two of them have shared some very sweet moments on screen thus far, so if things keep progressing this way, he could be in this thing for the long haul.

As we all know, we don’t see every little interaction or conversation on The Bachelorette and there are plenty of sides to these men that we might never even see on the show. That being said, Dean’s Instagram shows The Bachelorette contestant’s soft and totally down to earth side. Mainly, when it comes to his dog. Well, dogs in general, but who’s counting? And that little fact might go a long way if he sticks around long enough for Rachel to learn of his love for man’s best friend.

As seen this season, Rachel’s own dog Copper is very important to her. So important, in fact, that when he broke his leg, she rushed home to bring him back to Los Angeles with her while they taped the show. If Rachel wasn’t already totally into Dean, learning about his love for dogs would probably do it for her.

Much like parents who brag about their babies on Instagram, Dean is the proud dad to his own fur baby, Nala, who has been part of his family since she was a puppy. From giving her bunny ears for Easter to referring to her as "nugget" or his "queen," Dean is definitely a devoted dad to his adorable dog.

He's said on Instagram that while he’s not sure her breed, he guesses Nala to be a golden retriever and lab mix. And the earliest puppy photo of her was posted in 2012, so they’ve been a team for a long time now.

Of course having a dog doesn’t inherently make you a good person exactly (though it's certainly a strong indicator in my book!), but the fact that Dean has a dog that he’s so devoted to brings out a whole other side of him. So far this season, he’s managed to make a pretty good connection with Rachel and even stay out of a lot of the drama that’s already flared up, so he’s also got that going for him. Additionally, he seems to love dogs of pretty much any kind, so he really missed the boat on that one-on-one date where Rachel brought Copper along.

Dean and Nala's relationship definitely shows that The Bachelorette contestant has a big heart and more layers than what fans may have initially assumed. I mean, any guy who calls his dog his queen is kind of a keeper, right?