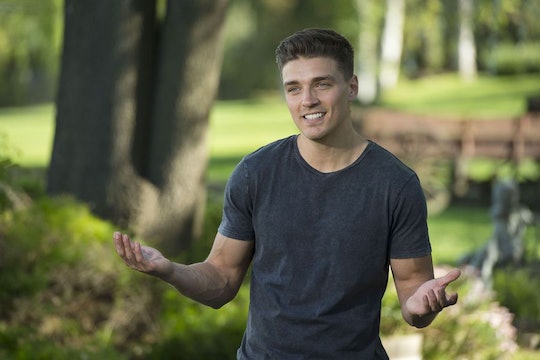 Dean Has Potential On 'The Bachelorette'

Even if Dean is forever remembered as the guy who made the remark to Rachel about going black and never going back, he’s still been able to redeem himself so far this season on The Bachelorette. Monday’s episode proved that he might be a real contender for the Dallas attorney’s final rose, mostly because they actually seem to have a legit connection. But since roses don’t pay the bills, fans are going to wonder, what is Dean’s job outside of The Bachelorette?

The contestant may only be 26 years old, but he has a full-fledged career that could definitely help fairly contribute to any household, should Rachel choose him as her future husband. According to his LinkedIn profile, Dean has worked at StartupTAP as a recruiter for the past few years. He’s also worked simultaneously as a recruiter for Apica Systems, a software company, but right now his time seems to be spend more with StartupTAP, which works to find employees for companies and businesses within Southern California.

It also works with smaller business and entrepreneurs to help build up their employee list and Dean is a big part of all of that as one of the company’s recruiters. It’s unclear what Dean’s net worth is, but according to Glassdoor, the average salary for a Los Angeles recruiter is more than $44,000 with a maximum of $83,000 on the scale.

And Dean’s career choice also enables him to be able to travel a lot, according to his Instagram, so he seems to have done pretty well for himself. Not bad for one of the younger guys this season on The Bachelorette. At 26, Dean is six years younger than Rachel, but let’s just be glad that his occupation isn’t something like "Aspiring Boy Band Member" or "Part-Time Gardener" which both sound like jobs that could legitimately be listed under contestants’ names on this show. Or, you know, "Whaboom" or "Tickle Monster," which are painfully real titles this season.

But while Dean may have at first seemed like someone to brush to the side, given his initial comments to Rachel, the connection and interactions he’s had with her so far make it seem like she’s actually very into him and on top of having an actual career, things are looking pretty good for Dean on The Bachelorette. It’s too soon to tell if he’s final four material, but he also didn’t just have a girlfriend show up to call him out, so he’s likely still in Rachel’s good graces, at least for now.