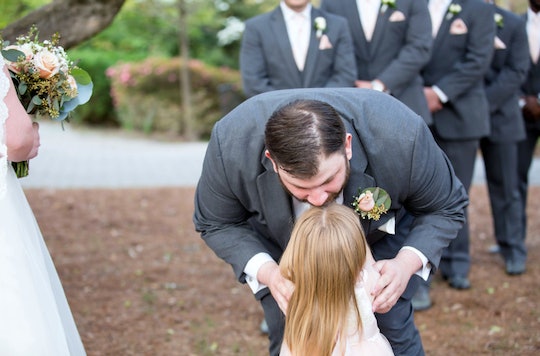 Dear Husband: You're Not My Daughter's Birth Dad, But You're The Father She Deserves

When I was six months pregnant with my daughter Alice, I knew my marriage to her biological father was over. It was toxic and emotionally abusive, and it was obvious that Alice and I were no longer priorities to him. So when she was 2 months old, I left him. It wasn't an easy decision, even though I knew it was the best one for everyone involved. But the difficulty of leaving didn't really stem from my concerns about Alice — I knew she would be fine with a single mom. I was more upset about the realization that everything in our lives had changed. Which is why there's one thing I want to say to my husband on Father's Day — you're the dad you didn't have to be, but you're the dad Alice deserves.

My current husband Nick met Alice when she was 6 months old. We had been texting for nearly a month before we actually met IRL (thanks, online dating!), and it took me a full two weeks to send him a picture of Alice. He knew from the very beginning I had a daughter, but I was nervous nonetheless. I had no idea what he would think of her, but I was adamant that he needed to understand that Alice and I were a package deal. He didn't just have to love me — he had to love Alice, too.

I told him all of this in the weeks after our first date. In fact, I told him this several times, especially if we had been drinking. My words slurred together as I begged him to let me know if a kid was too much for him. But every time, he said no. He couldn't wait to meet her. He knew he would like her as much as he liked me. He said he was ready.

That's how he ended up meeting Alice on our very first date. I had no babysitter, so we ordered sushi and ate it on the couch while watching my favorite episodes of How I Met Your Mother with Alice between us, gumming on a teething biscuit. The two of them had already bonded, creating a game of drumming on the tables as we waited for our order. (A game they still do, even though Alice's drumming is much louder now.) When we walked into my house, he offered to hold Alice. She immediately kissed him and snuggled into his shoulder.

He promised me I would never have to do the PTA meetings alone, that he would be right next to me at every ballet recital, and that he would make sure she had the best helmet for all of her bike lessons. As I told him over and over that he didn't have to do all those things, both of us got teary-eyed. "I know I don't have to," he said. "I want to."

Still, any single mom will tell you that it's nerve-wracking to date someone when you have a small child. You're concerned about how your child will feel about your partner, and you're worried that the pressure of having a child will be hard on your relationship. I knew Nick wasn't the type of man to get upset if I had to miss a date because my daughter was sick, or if I had to miss his work party for a ballet recital. And, truthfully, I didn't feel like I needed more from him than that.

But I had to make it clear — I wasn't just looking to find Alice a dad. I wanted to find a partner. The two roles were different. Just because Nick supported me and was there for us didn't make him her dad — it made him a good partner. But for him to be her dad? That put a lot of pressure on him and his relationship with Alice.

I knew that Alice and I were just fine on our own, and that we didn't need Nick to make us a family. I didn't need him to put toys together on Christmas Eve. I didn't need him to teach Alice to ride a bike, or to scare the monsters away from under her bed. I could do all of those "dad" things and more. Nick didn't have to be her dad — he just needed to be my partner.

But just a few weeks after he met Alice, he told me how much he wanted to be part of our family. He promised me I would never have to do the PTA meetings alone, that he would be right next to me at every ballet recital, and that he would make sure she had the best helmet for all of her bike lessons.

And he meant it. As I told him over and over that he didn't have to do all those things, both of us got teary-eyed. "I know I don't have to," he said. "I want to."

Stepfathers tend to get a lot of flack, even well-known ones like Russell Wilson, whose sweet Instagram post to his wife, Ciara, attracted criticism when he referred to his stepson and the child he had with Ciara as "our children." Commenters were quick to tell him that Ciara's oldest son, Future, wasn't biologically Wilson's, that Future already had a father, and that Wilson needed to stay in his lane. All stepfathers are told the same thing: let the kid's "real" dad handle raising them.

Nick didn't complete our family. But he made it brighter and better than ever before.

But here's the thing about dads like Nick — he does everything that a "real" dad does and more. There's no obligation for him to be a father to Alice. There's no handbook that says he has to take on the role of father to her, that he has to get up at 3 a.m. and put her back to sleep, or that he has to make her breakfast in the morning and take her to school and read to her and sing to her at night. But he does it every single day, because he wants to. He's not doing it begrudgingly. He's not doing it for his ego. He's not trying to prove to anyone that he's a good dad. He just loves Alice so much that he wants to be her dad.

Nick didn't complete our family. But he did make it brighter and better than ever before. And my girl? She's going to grow up knowing two things — that both of her parents think she literally hung the moon, and that Nick never once felt obligated to be her father. How amazing will it be for her to learn that? He didn't "take on" any father role — he created it. And Alice is going to know the weight of his love because he chose her, just like he chose me. Nick is the dad he didn't have to be. But he is the dad Alice deserves.