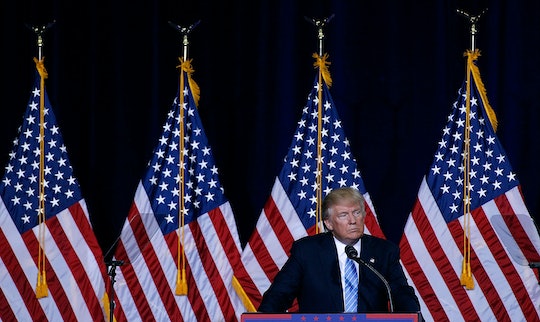 It's (somehow) still the very first week of the Donald Trump presidency, and some of the unlikeliest voices of the resistance lie behind... some national parks' Twitter accounts. Perhaps it makes some macabre sense that the protectors of our nation's most beautiful and sacred lands would try to defend its safety and integrity in the face of unthinkable affronts to humanity decreed from the federal government itself. So, when Donald Trump took executive action to begin construction on his notorious, divisive proposed wall at the U.S.-Mexico border Wednesday — one day ahead of an expected order barring immigrants from Middle Eastern countries — it may not have quite been a coincidence that Death Valley National Park tweeted stories about internment camps the very same day. The warehousing of tens of thousands Japanese Americans in these camps during World War II is, after all, a horrible blight on American history — just as the construction of the border wall would be.

The person at the helm of the California national park's Twitter presence — frequently dedicated to retweeting majestic landscape shots of the gorgeous land — appears to have gone political when the Trump administration announced the (taxpayer-funded) planned initiation of the wall, the sole purpose of which would be to keep undocumented immigrants out. Or perhaps it was the accompanying rollout of enhanced federal measures to expel the estimated 11 million who live here illegally now that prompted the display. It also could have been the news that the new president will make good on a campaign promise to suspend immigration from some Muslim-majority countries and ultimately severely limit the number of refugees admitted here as early as Thursday.

This trifecta quite possibly could have worked together to call to mind another American atrocity: Japanese internment.

The Huffington Post reported that a facility at the Death Valley National Monument became a prison to 65 Japanese Americans after a riot at another "relocation center" during one of the most shameful periods of American history. Facts about darker times that the park has experienced are perfectly within the realm of what could appear on a national park's Twitter account, of course. Then again, so is information about the very real reality of climate change, as South Dakota's Badlands National Park's social media gurus issued in tweets on Tuesday, after the Trump admin issued a gag on the Environmental Protection Agency in a terrifying move. Yes, on day six of the reign of Trump, acknowledging history and (again, very real) threats to our planet are earning dissenters radical status. And equally ominous? The Badlands' tweets were deleted just hours after they went live.

Death Valley's, though, have survived at least this long.

Just as Trump's vitriolic rhetoric about immigrants from Mexico and refugees from countries that are ravaged by war did during his campaign, his new moves inject fear into the hearts of so many living under his rule. "They’re setting out to unleash this deportation force on steroids, and local police will be able to run wild, so we’re tremendously concerned about the impact that could have on immigrants and families across the country,” American Civil Liberties Union senior legislative council Joanne Lin told The New York Times. "After today's announcement, the fear quotient is going to go up exponentially."

The president's executive orders will increase the number of detention centers and federal border agents, as well as limit federal funding for so-called "sanctuary cities" that protect undocumented immigrants from deportation, The Washington Post reported.

The cumulative effect of all this prompted the Anne Frank Center For Mutual Respect to condemn Wednesday as "one of the most hateful days in our nation's history" in a Facebook post. "Today the Statue of Liberty weeps over President Trump's discrimination," the lengthy post continues.

As Trump continues to make progress on his campaign pledges to limit women's reproductive freedom, repeal the Affordable Care Act, and to promote an insular, hateful version of America, he's trying his best to resurrect the darkest parts of our shared past. That's why it's worth commending the team at Death Valley National Park, which does not want to let us forget.