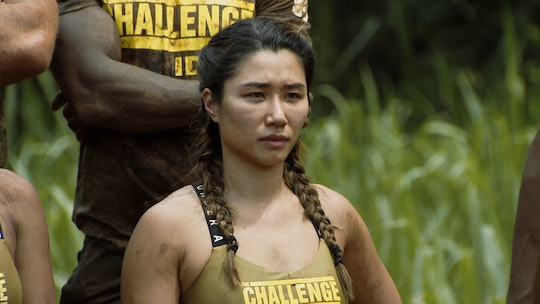 Dee might have been a rookie on The Challenge last season, but when she made her triumphant return on War of the Worlds 2, she came back swinging as a reinforcement. For some, that might mean being all business this time around. For Dee, it means canoodling with someone on her team. And honestly, Dee’s relationship status after The Challenge has me super curious. I really have to know if she and Rogan are together or if their showmance ended at just that. Because in a way, the latter might be best for Dee.

For Dee and Rogan this season, it was definitely interest at first sight. I’m not sure if either were head over heels for the other right off the bat, but their relationship has been a talking point among their fellow competitors and fans alike. When Dee confessed to MTV producers in a talking head interview that Rogan was "a big hunk of man meat" and he showed interest in her, it was a given that they would hook up.

I do have some concerns, however. Rogan’s Instagram is full of half-naked selfies and professional shots and he has a full plate traveling in a male review troupe. Nothing about Rogan says he is ready to settle down and it seems like Dee is catching real feelings for him. If Dee is single after The Challenge, it wouldn't be the worst thing for her after treading water with Rogan.

While it's unclear right now where Dee and Rogan stand after The Challenge, he did tell MTV News that he was interested in her before they were both even cast on War of the Worlds 2.

"I started watching War of the Worlds and I noticed Dee," he said. "I thought she was pretty hot, so I followed her on Instagram, and she actually messaged me. I asked her if she was going to be on the next season and she said, 'No.' And then when I got the news that she was on our team, that was lovely."

That’s all well and good, but one of the clips from Wednesday’s episode which was posted to The Challenge’s official Twitter account shows Dee in tears while out with the rest of the cast members. It’s unclear why she’s crying or who upset her, but my money is on Rogan, because despite their plan to keep things "exclusively casual," it doesn't take a detective to figure out that there are legitimate feelings there.

If Rogan is the reason for Dee’s tears on The Challenge, it’s just another reason why I seriously hope she’s single now. Even if she moved on from Rogan, it might be a good idea to take a breather after diving head first into a showmance almost as soon as the season began. And because Dee recently revealed on Instagram that she is moving to Los Angeles, it’s safe to say her relationship with Rogan hasn't gotten any more serious.

If Dee and Rogan fall in love this season and find a way to make things work between her world travels and his work and Instagram posts which scream for attention from other women, then I’m all for love finding a way. They just don't seem like the most solid match outside of the show.

Luckily, it looks like Dee is single, if her social media is any indication of her relationship status after The Challenge. She recently posted that she is living her "best life in Vegas" under a photo taken at a club and she seems to be having a lot of fun spending time with friends rather than a new love interest.

Hopefully Dee and Rogan have fun this season, but don't allow things to get too far. I don't think either of them have room in their lives right now for a long distance relationship and their individual games on The Challenge definitely don't need their relationship to be a bigger distraction.