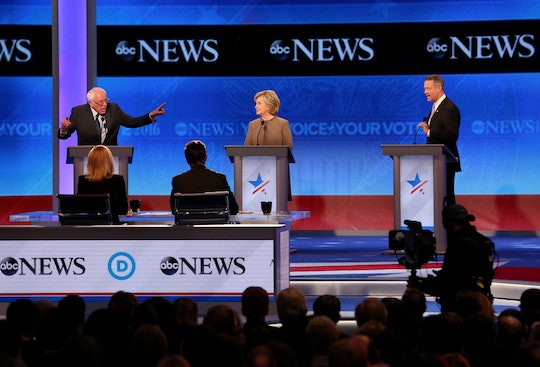 #DemDebateAndChill Is Trending, & It's The Best Thing About The ABC Democratic Debate

The weather outside is frightful, friends. Which is why you shouldn’t be ashamed if you just want to put on your best PJs and call that hot person you met last week to come over and watch the Democratic debate. I mean, it’s not a horrible idea even if it might seem a little lame, but still, it's not shocking that Twitter started talking about #DemDebateAndChill as soon as Saturday’s event began. In case you're feeling old and out of the loop: The trending hashtag is a play on the #NetflixAndChill, which is a meme-y way to joke about inviting someone over to “just watch a movie” and... ya know. You know.

The hashtag is particularly funny because the Democratic debate is on a Saturday night before Christmas, aka, a time when a lot of people are out at holiday parties. If you’re home watching the debate, you are probably really informed, politically inclined, have a cold, or work in media. Who doesn’t want to #DemDebateAndChill? What makes the proposition even more thrilling, is that there are just three relatively rational candidates during this Democratic debate. The Dem debate is super chill. It's like #ComeOverAndDrinkAWarmGlassOfMilkAndChill.

The Democratic debate is not as ridiculous or showy as the Republican debates; At least they have Donald Trump. No, the Democratic debates are like inviting someone over to watch reruns of Frasier with you. (Don’t ever do that.) That doesn't mean that Twitter didn’t have lots to say about staying in on a frosty Saturday night to watch Hillary Clinton take a long bathroom break, Martin O’Malley fight for some airtime, or Bernie wave his arms around. If you can't watch with a cuddly human, watch with Twitter:

Watching the Democratic debates is the ultimate quiet night in. If you can't get anyone to hang, there's always a hashtag. And there's no shame at all about that.